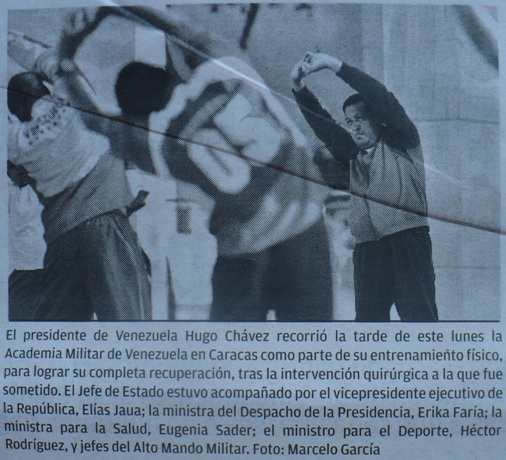 Since June, Cuban television seems like Chavezvision, as its five channels have focused on following the evolution and process of recuperation of the Venezuelan president Hugo Chavez, and all the direct and telephone communications between Cuba and the people in his cabinet, and every one of his appearances and actions since his return to Venezuela. They rebroadcast it over and over as if they are preparing us for an exam. As we no longer suffer from the long speeches of prior days, now they grind away at us with those of the oil barons.

This narcissistic soap opera that we Cubans have already lived with for far too long has made us suspicious of the tools used by the caudillo rogues to maintain themselves in power. On their Latin flutes they play romantic melodies pleasing to the ears of the majority, to enchant the masses. It even comes to the point that I tend to doubt if the illness of Hugo Chavez is real. This new version of the tropical “reality show,” seems woven by people very skilled in the art of remaining in power and their similarity and relationship with Havana is not coincidental.

But much is at stake, not just the arrogant personal victory of a man of the party — here they mixed, confused and personified the concepts of state, nation and country and focus those on one man — but an entire country and three generations of Cubans who have worked hard for the consolidation of a utopia that is terminally ill.

We are, by adversity, a country hampered by dependency. To our own idiosyncratic anchors we must add historic events that have cemented the subordination. For more than four centuries (from 1492 to 1899) we depended on Spain, until 1959 on the United States, for almost 30 years (until 1989) on the former Soviet Union, and now on Venezuela. If we can point to something comforting in our favor, it is that the durations of our dependency have been diminishing. What is not cut short is the corresponding adulation that is levied, as evidenced with the “native volunteers” in service to Spain during the time of the colonial period, and that is reflected today in the elite of power of our country, when generally (not just now when they say they are sick) they give more media coverage to a foreign president then to the leader of Cuba.

There is a concern in Cuban society with relation to the future if the condition of the Bolivarian leader is real. What will become of Cubans if we stop receiving the daily tons of oil sent to us from Venezuela? Will we return to the Special Period? These are the doubts that are in the street; although many think that the old oligarchic and nepotistic formula of the caudillos will not find an exception in the Venezuelan case and that Chavez will perpetuate himself in power with the naming of his brother as his successor. In any event, I champion the recovery of the leader, but we must look to our own mental health and delete these repeated propagandistic exaggerations that alienate our daily life. Perhaps the illness of Chavez contributes to the inauguration of true reforms with perspective and without the laying manipulations, the structures to put us on the path toward a democratic state of rights and common good. Meanwhile, this is precisely what we must focus on and we must not lose our minds.