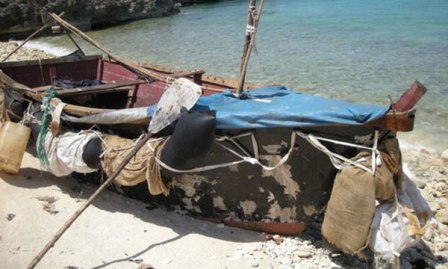 José, with his 35 years, dreams of driving a convertible silver Audi. His eyes are open, it was not difficult for him to come back to reality when his fan stopped due to a blackout. The heat of the night activates his brain. He thought of a solution for his existential problems.

He wanted to prosper economically, but was convinced that anything he thought up would carry him over the line to illegality, and with it, the possibility of going to prison. “If I were Mexican, I’d risk my life crossing the border,” he said to himself. But he was in Cuba, a country that strictly regulates departures from the country.

He devised a plan to cross the 90 miles of sea that separated him from his American dream. Building a rustic vessel that he generously called a boat. He invited his two best friends to join in his enterprise. Each looked for two iron tanks (55 gallons), the kind that people commonly use to store their water reserves.

They began their work in the living room of his house. First they sealed the containers with no more than 20 liters of water inside. Then, they joined them together with angle brackets leaving space between them to put inflatable truck tires. They only lacked the installation of the keel to break the waves, when they heard a knock at the door.

They jumped out of their skin when they saw the chief of the sector, accompanied by two policemen in a patrol car. First they said that neighbors had complained about the noise of hammers and engines, and then that they had information that they were building a boat to leave the country.

They came with a search warrant which they executed on the spot. They seized what didn’t look much like a boat, and took them as detainees to the police station. To their astonishment they released them five hours later, without any penalty.

They were naive, because 15 days later they received a decision from the Harbor Master imposing a fine of 3,000 pesos in national currency, for building a boat without permission.

The infraction, described as very serious, is characterized in Decree Law 194 of June 19, 1999, “Of the infractions with regard to the possession and operation of vessels in the country,” supplemented by Resolution No. 2 of December 7, 1999 of the Ministry of the Interior which establishes procedures for its implementation.

The rule issued by the Council of State, considers 14 offenses and classifies them as minor, serious and very serious, punishable by fines ranging from 500 pesos to 10,000 pesos, including the possibility of subsidiary punishment of forfeiture. The Harbor Master is authorized to implement the sanctions.

José added to his already overwhelming economic problems a fine that exceeds what he could legally earn in a year. They say it costs nothing to dream, but trying to realize a dream can be very expensive.