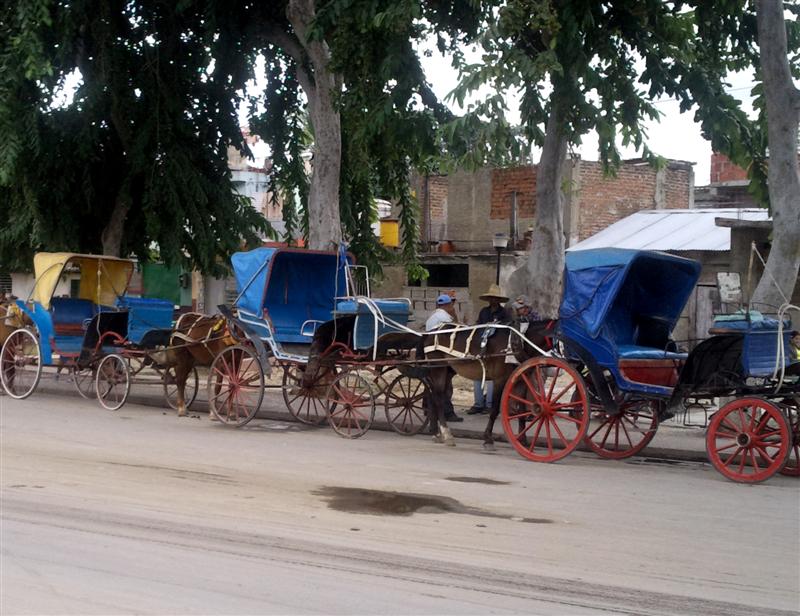 His face is a catalog of discouragement. Sitting with his elbows on his knees, his horse’s reins in his hands, he seems to me like a pillar of salt from another time. With several days growth of beard, and a yellowish coat he must have exhumed from a closet in these days of winter.

“Would you give me a second, please? I’m a journalist and would like to ask you a few questions.”

From his seat, over my head, he looks at me with discouragement. He doesn’t agree, nor refuse. He’s just there.

“I would like to ask you about the strike you people held a week ago,” I said, with fear that once again I would receive the same evasive answers as on my previous two attempts: a tattooed young man told me, next to his horse, “No brother, I wasn’t here that day”, and drifted away in a hurry; and a chunky old man, wearing a palm frond hat, answered in a more sincere way, “Look, I don’t want to get into more trouble, go ask someone else”.

A little over a week earlier the coachmen from my traditional Bayamo had undertaken an unthinkable action: two days of absolute strike. A strike in a country without strikes, a country with the only constitution in the planet that does not recognize such a right for its laborers.

The unusual news spread across the whole island: the news exclusive had made it all the way to my hospital bed in Havana through a young nurse who took it with natural cheerfulness, “Bayamian, the coachmen of your town are on strike. Let’s see if you people light the city on fire again.”

“I would like to know the causes of this strike, in essence, what were you demanding?” I asked him, vaguely hopeful before his silence, a silence that, at least, didn’t push me away from there as his coworkers had done, their voices paralyzed by fear; I could have been a State Security agent, an informant, a plainclothes cop.

He takes his time, chews his cigar and speaks without looking at me, as if something in the distance really caught his attention.

“Man, the only thing we were asking for was for them to leave us barely enough money to eat. That’s all. For them not to abuse us anymore.”

His words, said in the same peevish tone, thrill me. I wasn’t expecting this access to the truth.

“Why the abuse, what has changed?” I ask.

“The amount of money we have to pay the State now, in order for them to let us work. The taxes and payments due to thousands of different made up things they have recently imposed on us, just because.”

What is officially handled with the carefully chosen terms such as “Tax Adjustment,” is summed up for this man and for millions of other Cubans, as something very simple: the rates imposed by the Ministry of Prices and Finance for the practice of self-employment, in the majority of the cases, are simply exorbitant. It’s unsustainable.

Long before this forty-eight hour strike coming from a very humble sector, I had received news about the tax outrage. I heard testimonies from a neighborhood barber who, after twenty-six years of practice, was being forced to give up his work permit because the two-hundred pesos that the State fixed as his monthly share had become astronomical. In the last month, he had had to sell a couple of his possessions in order to make up the sum.

“How much were you paying before, and how much are you paying now? ” I proceed with my interview, afraid that the six people who would fill up his carriage would appear and my brief investigation would be cut short.

“Before, the monthly permit fee was 130 pesos. Now, they brought it up to 150 pesos, plus 87.50 pesos for Social Security, plus 10 percent of our daily earnings, for using this place to park our carriages.”

I tried to rapidly calculate the figure we were talking about, and asked him for daily numbers; quickly adding it up, we agreed on an approximate total for his monthly taxes: around 500 pesos.

The carriages in Bayamo have, for some time, left off being traditional museum and classic colony pieces, to become a solution to the severe urban transportation problems.

Every morning, a legion of workers paid 1 Cuban peso and traveled on them to hospitals, schools, grocery stores. Waiting for the city buses had become, for many, an unbearable chimera, alleviated only by these mobile artifacts, an unequivocal symbol of the villa founded in 1513 by the vicious Spaniard Diego Velazquez.

And all of a sudden, on an ordinary morning, the daily peso for the carrier doubled and in some cases, it tripled; the coachmen had just raised the prices of their fares, and the laborers’ salaries remained the same: 300 pesos, average, a month. The math was stressful for those who had to travel on them daily.

“The thing started from problems with the people, look,” he tells me, and now, for the first time I think he’s engaging in our conversation. “We had more discussions than trips. Many didn’t want to pay us, they would call us thieves. And the only thing we could say was, ‘Go complain to the authorities! We don’t want to raise prices, but they’re forcing us to!’ We were like that for almost a month. Until we had to get together and present the problems. And a moment came where we couldn’t take it anymore, young man, and we had to stop.”

His words spill out as he vents. They carry the suppressed anger, vibrant, of someone who can’t resign himself to it all.

The day they reported they wouldn’t work anymore, the State forced private trucks and buses, with other routes, to cover their trips. Not one person from the union was able to intervene, not a voice from those other transportation modes was allowed to protest: the master spoke, you could only obey.

On the second day, they gathered them at the headquarters of the provincial Government, bearing a peculiar and fragmented manual of intelligence. Never all together. They relied on the ancient maxim, “Divide and conquer.”

They pressured them in small groups. Under the guise of more clearly explaining the mechanisms they removed the seeds of disagreement with sophisticated threats: if they persisted on keeping their reactionary position they would forever lose their license.s They would no longer be able to work with their animals, which by the way, had cost them several thousands.

“Imagine for yourself if the people had not been intimidated,” he makes a gesture of annoyance, drowsing in his seat again at the level of my forehead. “We all have children here, families. We all have to kill the hunger, and this is the about the only thing we know. There are many who can’t even recover their initial investment, you understand? Who would continue after that?”

I could imagine the rest of the story, though the man didn’t tell me. I assumed from the fear, the hesitant speech, the refusals I’d received previously: it was the panic of being branded counterrevolutionaries. The investigations by the intelligence services, the interrogations to determine the leaders of the discontent; they were, in those days, taking over the area with their inexhaustible presence, the repressors with kid gloves from State Security. In Cuba they cannot allow the sowing of public unrest.

This is, in effect, the chronicle of an announced conflict: the grandiose plan to revive the Cuban economy not only contemplates the layoffs of hundreds of thousands; not only does it contemplate permits to exercise ridiculous professions — button-coverer, scissors grinder — to make a personal livelihood; but it includes, in addition, a Cyclopean increase in taxes for all private businesses, although the fundamental ingredient, money, continues to be absent from the family horizon.

The immediate consequence? Thousands of self-employed workers thinking, with anger and helplessness, about giving up the work that in the last years had allowed them to feed themselves, badly. Offering a license placed at an impossible height. Infinite shame should be the only name of this congress.

“Thanks very much for your time,” I say, by way of goodbye, when I see that our fleeting interview is ending. “And have a good day.”

I turned and before taking off I heard his voice again, and I paused for another second, looking again at his face without dreams or hopes.

“Don’t mention my name in what you write, boy,” he says, and I can barely suppress my pain, furious frustration, at hearing this plea from an adult man, independent, whom the system has completely neutralized with fear. “The only thing they haven’t done to me is seize the coach for saying things I shouldn’t.”

I make a gesture with my hand: don’t worry about it, it won’t be me who will threaten his poor living for his family.

I return to my personal bubble, suffering in silence for a hostile reality, that every day is more incompatible with the happiness of Cubans; a reality that from my earliest awareness has only threatened to worsen, bringing worse news, worse years, more acute shortages. Returning to my laboratory of ideas I can’t stop thinking about a phrase of the poet Lezama Lima who asked, with biting bitterness, how can we find out way out of this dark alley.