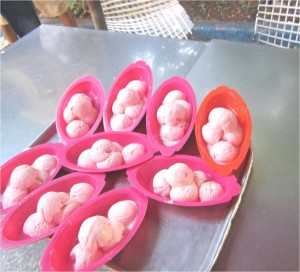 Coppelia is the biggest ice cream place in Havana. The usual clients of the emblematic center — many are kids — believe that the bad service, the limited variety and the quality of the ice cream are the evils that afflict the so-called Cathedral of Ice Cream. However, a more inquisitive look reveals other threats.

A lucky day is when you go to Coppelia and there is no long line of waiting customers eager to eat something pleasing and cheap. Each scoop of ice cream costs 1 Cuban pesos, about 5c USD. A very affordable price in a country with two types of money in circulation: the Cuban peso and the CUC (or “Cuban Convertible Peso, worth 25 Cuban pesos) that is consider a currency for foreign exchange.

Once inside the installation, you wait for the staff to tell you where to sit. It’s not use protesting, or claiming that the place is empty and you can choose your own table. To avoid the first argument, it’s recommended you accept the direction ofthe employee. It’s better to obey him than to shout, “Let’s go have ice cream where you pay in hard currency!” An important caveat when a serving of Nestle ice cream costs at least 1.35 CUC (34 Cuban pesos), more than the salary for one day’s work.

Then, the variety of flavors holds other surprises. The daily offering is one flavor” coconut, banana or orange. On occasion there are three different flavors. Sometimes the soda-man — the one who serves the treat — is wrong and when it should say coconut, it says pineapple for example.

The assortment of cutlery and trays is a special case. Theft and other bad habits acquired by the Cuban population led to the beautiful spoons and other items disappearing from the shelves. The search for a solution favored an excellent excuse to lower service costs. At some point plastic trays and deformed spoons were introduced for eating the ice cream and desserts in the place. For this to be brief, I will omit the details about the squalid decorations, altered rations and the deplorable sanitation. As well as the feedback from customers.

It is not the aim of this analysis to predict whether the Coppelia ice cream parlor will remain in the market when other business concepts, more modern and dynamic, are introduced. There is, however, some evidence that could indicate the beginning of a new phase.

The business of the Coppelia ice cream parlor began as a total success. At that time it met the key elements of a great venture: market niche, specialization, different service, a leader in its specialty and competitive advantage. Coppelia came to be considered an attraction in the capital of the Republic. It has a circular architecture, perhaps imitating the costume or tutu of the ballerina of the famous nineteenth century ballet it is named after. No wonder it is considered an architectural symbol of the early years of the triumph of the Revolution.

Although the information is not available to the public, it would be interesting to know the annual costs of electricity, water and maintenance of all buildings of the ice cream parlor, and to relate this information to the sales price of ice cream and real wages for all workers, excluding, of course, the profit from the adulteration of the standard ice cream. It is likely that the profit margin of the state is not so high considering the outdated technology used and the overall costs of service. This aspect should be investigated in greater detail.

In any event, to modernize the ice cream parlor requires significant funding; changing the behavior of employees and staff is one of the toughest challenges; and to make matters worse, providing decent service at such a low price is almost impossible.

Solutions exist. One of them, divide the installation into several independent businesses or ice cream parlors. Another variant, very controversial given the symbolic meaning of the installation: Sell or rent the premises to a joint venture or private national company.

It is always legitimate to explore other options. After all, change is inevitable in any organization. Coppelia ice cream would probably survive if it changed its service and supply. Today, if we imagine the famous French ballet star, we are forced to say: Coppelia is dancing badly. She is missing her steps.