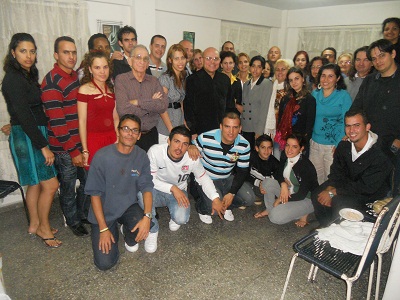 Dagoberto Valdes speaking on the 4th anniversary of the magazine.

The time God gives us to do good works and grow in humanity passes quickly. We are already celebrating the fourth anniversary of the digital magazine Convivencia.

The presence of all of you here and the multiple and diverse collaborators that have written for the magazine in these twelve months, show that a magazine does not stand alone, nor only through the members of its editorial staff. The magazine is created and maintained by its collaborators who put their names and thoughts at the service of the present and future of Cuba, and in consideration of all who want to read, learn to think, disagree, suggest, propose and work.

This year of 2012 has been a year of tests, maturation and growth.The three things that have contributed the magazine being more well-known, more read, and more sought after.

Tests such as the harassment, accusations and pressures of every kind, direct and indirect, that serve to strengthen our spirits, purify our intentions and sharpen our good will and our methods of working. The early Christians, persecuted by the decadent Roman Empire, used to say with simplicity that it was given to them to suffer: Per crucem ad lucem: Through the cross to the light.

All this produces maturation of people and works. Maturation that means: the ability not to let ourselves be manipulated from one side or another; to be faithful to our purpose and to our identity as a project of Cuban thought; to exercise citizen sovereignty and freedom of expression, in an ethical way, respectfully and proactively, putting our love for Cuba, the welfare of Cubans, above everything.

There are no better fertilizers of growth than these movements of the human spirit: through the cross to the light; and of this personal and community maturation. This is the secret of the growth of Convivencia. There is no doubt that the attacks of the Media of Communication officials have contributed to helping us learn and mature.

We give thanks to God for the solidarity, understanding, respect and affection that thousands of people and many institutions, within and outside of Cuba, have offered us. This has made our name, Convivencia, be one more experience of living and sharing for a large number of Cuban men and women who look with hope on the future of Cuba.

The magazine Convivencia lives for them.