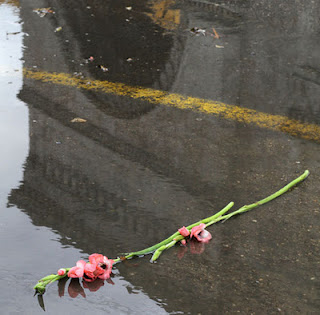 The Cuban writer Jorge Alberto Aguiar Diaz (JAAD) pointed him out to me. Humbert Arenal had just awarded my book (Collage Karaoke) in the “Pinos Nuevos” Contest in the year zero, or 2000. JAAD said to me, “Go and introduce yourself. This old guy is the last witness of another era.”

In fact he looked like a very old man, emaciated, with his slightly Anglo elegance and certain hints of a lord. A man with style, in the amorphous central courtyard of the Cuban Book Institute.

I approached him. We talked. I went to his apartment in the building at Infanta and Manglar several times. He was always friendly with a late beginner, as I was, praising my “conditions to narrate.” Later we were even jurors together on another literary contest (his opinions were too gentrified at that point in his life: he detested dirty realism for extra-literary reasons that he considered literary). Everything was accelerated. Everything consumed in the course of a year. Then I wrote my story, “Requiem for Humberto Arenal,” which gained a Mention in the “La Gaceta de Cuba” contest (December 2001), but which was never published at my request.

I went and gave it to Humberto Arenal as soon as my “Mention” was announced. And that was the end.

I received threatening calls from him and from the then husband of his daughter. My story was offensive shit. It insulted him. I made fun of his age. I ridiculed him in his relationship with the dead. I picked on his sexuality. Tears filled my eyes (I was on the public telephone at the bodega at 21st and H in El Vedado, I’ll never forget it). I felt sorry for him and me, for Cuba that we would fall out over, for not being able to take the game to the limit in a text where I used his name as a bridge between the living and the dead, characterizing not only his domestic scene but our entire literary city, cenotaph of unburied corpses and unburied secrets. I think his family influenced him in that crazy reading.

The son-in-law’s call was the saddest: he only threatened me physically and then with denigrating me publicly on a program he hosted on national television.The permanent dengue epidemic that swarmed in Havana prevented him, or at least dissuaded him.

I couldn’t ask for forgiveness from any of them. I hung up. Despite my promise to never go public, Humberto Arenal took my story to the Ethics Committee at the Cuban Writers and Artists Union (UNEAC), though by then I no longer belonged to UNEAC. I don’t know the outcome, but apparently it was favorable to me. Then came his National Literature Prize and I was secretly happy for him. In one sense he didn’t deserve it. But he deserved it in many others.

Since then I have dedicated myself to reading Humberto Arenal (he published a lot in the last decade). I even found a copy of the prince he called “the first novel published in the Revolution”: The Sun Overhead. He had great stories, enough to be immortalized in our context. But his long-winded texts are without exception very very very weak, someone had to stop him (Reinaldo Arenas in “The Color of Summer” leaves that task in the hands of Virgilio Piñera). I will not opine on other areas of his creation. Like all intellectuals who did not cause a rupture, his correctness no longer calls me (I’m not his reader, obviously, as he was no reader of “Requiem for Humberto Arenal“).

Other chances and characters wove our following missed encounters, where we always diplomatically avoided each other. We never crossed another word, as if we were political polar opposites instead of writers.

My face has changed so much that perhaps he did not recognize me. Humberto Arenal also looked more radiant at times. I see him vital and alert always giving me encouragement, especially when they started, soon enough, scavengers rumors about this or that disease.

I will fulfill my own promise never to publish my story of 2001 “Requiem for Humberto Arenal“. I know that the Cuban exile retains a copy (the exile as cause and consequence of all things), and I respect even this posthumous vocation of two Cubans did not get sane School Our ways to create or interpret anything.

Farewell, then, Humberto Arenal. Too much time is no longer left to anyone. The final places of my apocalyptic story have turned now to realism. We stay in a bleak homeland. Nothing comforts us. Your generation, not just writers but of rulers, is not going to leave even a hint of a country to breathe afterwards.