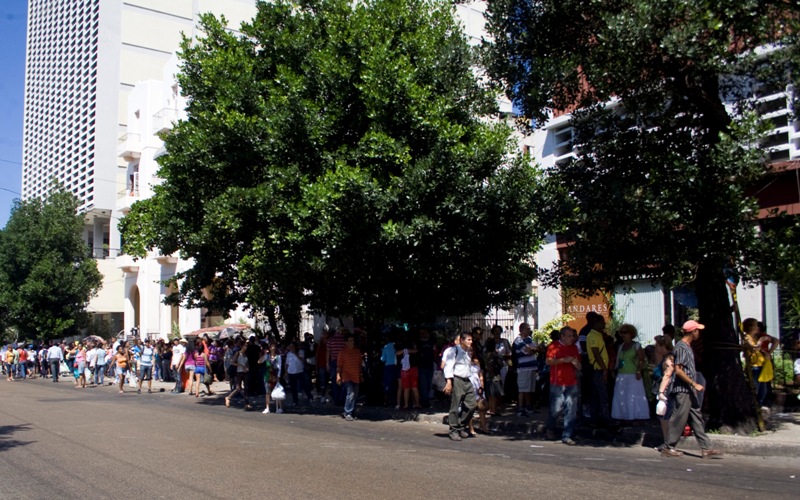 If an imaginary group of Cubans, isolated from all information since 1984, had been shown the movie Conduct today to bring them up to date on reality, they’d have escaped the theater sure that the film falsified the situation: that it was trying to show a pessimistic and counterrevolutionary version of their country.

But that’s not how the people reacted coming out of the theaters, wiping away their tears, their hands red from so much clapping. Especially those Havanans who saw projected on the screen the reality that hits them: their own neighborhood in ruins, the alcoholic neighbor with a child practically abandoned, the lack of ethical values, the police corruption, the discrimination against Cubans from other provinces, the physical misery on every corner, the moral misery in every opportunist.

Fortunately Carmela remained, the retirement-age teacher who, despite having seen her children and grandchildren emigrate, preferred to remain alone on the island, and in her classroom “as long as I can climb the stairs,” because she’s convinced she has the strength to help those kids in need of love and understanding.

But the biggest absence in Conduct is “the New Man,” whom those hypothetical Cubans, asleep or in a coma, conceived even up to the mid-’80s and who they would have expected to see incarnated in this work bringing them up-to-date. The children that those imaginary viewers would insist on finding in the film would be educated children and not those foul-mouthed coarse bullies; the schools would be equipped with laboratories and the houses would appear comfortable and safe.

There would be no dog fights, nor strung out women prostitutes, much less the drama of Carmela facing an attempt to fire her for protecting a student threatened with being sent to a reform school for defending a girl who dared — let’s hear it for audacity! — to place an image of Cuba’s patron saint on the wall of a classroom.

The producers didn’t create an artificial space in the studio in the style of The Truman Show, nor was there some antique store where they found the school desks and blackboards, nor did they make a citadel out of cardboard. The director didn’t have to carefully teach the actors — kids, teenagers or elderly — linguistic models and formulas far from their own personal experiences. Perhaps it was because of this that the audience, after long lines to get into the theaters where Conduct is showing, so identified with it, felt so excited. Because of this and because those present in the movie theaters haven’t spent the last 30 years sleeping, but rather starring in this tragedy.