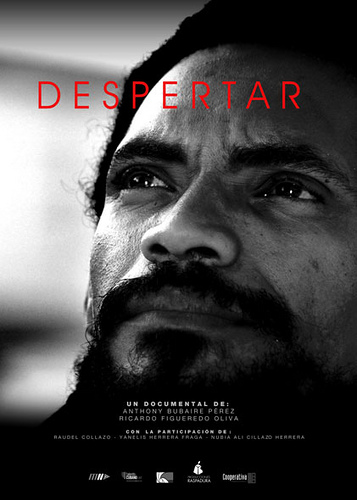 Every February, the Chaplin Cinema opens its doors to the Young Filmmakers Exhibition organized by the Cuban Institute of Art and Cinematographic Industry (ICAIC). The Exhibition is presented as the only and therefore the best chance for the youngest filmmakers to show their work.

Organized under the guidelines that govern the ICAIC, and being that this is a center that, despite enjoying some autonomy, meets the state interests, the Exhibition retains the right whether to accept films according to its policies, which do not serve the interests of the filmmakers. So it can be said that it decides based more on political correctness, than on the quality of the work as artistic and critical means of expression.

It is evident that under this right of selection is hidden censorship and exclusion from the system, which the documentary Awakening, directed by Ricardo Figueredo Oliva and Anthony Bubaire did not escape this time.

The topic is Raudel Collazo, best known for Escuadron Patriota (Patriot Squadron), who, in the lyrics of his now-censored songs, takes on with strong and direct speech core issues that attack Cuban society, such as racism, fear and segregation. Which brings us back to the show last year when the documentary Revolution, which explores the history of Los Aldeanos (The Villagers), Cuban hip hop’s most successful group on and off the island in recent years, was also censored, only this time as opposed to that, all parties did not reach consensus.

The freedom of creation and exhibition is still a conquest to be reached in Cuban audiovisual media, and institutions rusted away by time and their policies, which are obsolete in the current context, look like old dinosaurs today. More than ever, Cuban cinema lives today among the hundreds of filmmakers such as Anthony Bubaire and Ricardo Figueredo who strive to assault and present reality with all its nuances.

It is necessary that the ICAIC, an institution that has championed art as a fundamental premise, echo the needs for which Cuban society is avid: the completion of an art that is more than their reality, a cinema that shows them to be more than they are and what can be, and that for once leaves behind those politics that are maintained only in cinema tied to the remnants of a past that only endeavors to reveal the reality of two colors: red and green.