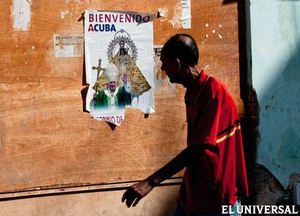 From early in the morning, in the Havana municipality of 10 de Octobre, the elderly man Eladio seeks a few bucks calling out the routes of shared taxis bound for Vedado. According to the list of 178 occupations that can be exercised by the self-employed, this makes Eladio a ’Travel Manager’.

Cubans, allergic to the official jargon, call them “buquenques.” The word is not new to the Creole slang: Alejo Carpentier used it in his novel The Rite of Spring. There are legal and illegal buquenques.

Eladio is of the latter. He’s a poor devil who walks around dirty and smoking the cigarette butts thrown on the street. He is not usually aggressive and doesn’t harass passersby for alms. He earns some money as a buquenque. Enough to eat a lean and poorly developed diet put together in some a dilapidated State place.

Earlier this week, Eladio was picked up by a joint operation of the public health authorities and police, and driven to an unknown location. In this ’cleansing operation’ also loaded up with homeless beggars, the insane, hustlers and alcoholics spread like an arrow across the city.

The independent counsel Laritza Diversent is shocked at this particular raid. “They take advantage of any regulation to make the sweeps. Undoubtedly, they are violating the rights of individuals. They don’t do it for compassion. They just don’t want ugly scenes such as “dumpster divers” rooting through the garbage cans or spouting off with some crazy gibberish in the 24 hours that the Pope will be in Havana,” said Diversent, who runs a free legal advisory firm.

Near Red Square, in the neighborhood of the La Vibora, a drunk who often sells newspapers, magazines and old books, these days is no longer tending to his blanket in the doorway at the corner of Carmen and 10 de Octobre.

“I’m expecting the coming of the Pope. For us, the Cubans without resources, this priest has brought problems. For three days now I have been able to come up with the “scratch” to eat or have a drink, believe me it is not easy. If church and state were humanitarian, they should open kitchens for the needy and shelter where those of us with no homes can rest,” he says indignantly.

It is typical of the Cuban government to create an artificial environment for VIPs. From painting walls to repairing streets and planting trees where visitors will pass by, as in the Spanish film Welcome, Mr. Marshall.

This operation of image is a part of a much wider game. Within the dissent it’s said that the opponents considered most “recalcitrant,” those of the “barricades,” will be detained as long as the Pope remains in Cuba.

The government fears that dissident groups will shout slogans or deploy banners in the course of two Masses that the Pope will officiate on the island on March 26 in Santiago de Cuba and March 28 in Havana.

Another rumor circulating among the dissidence in recent days is that the opponents’ cell phone lines will be cut. But not only the dissidents will be affected by the interruption of wireless service.

It was also said that before his arrival until the return of the Pope to Rome, the cell phones of the phone company workers will also be interrupted. The alleged pretext is to not overload the lines. The engineers and managers of the only Cuban telecommunications company, ETECSA, have their phones recharged to a value of 120 and 300 convertible pesos monthly.

The atmosphere is much more tense and repressive than for the visit of John Paul II, January 21-25, 1998. Nor are there great expectations among the people, as happened with the Mass celebrated by Karol Wojtyla.

Although data released by the Vatican Information Service says that the 60.19% of the population is Catholic, the fact is that a majority of Cubans every day scratch their heads, and their pockets, to see how they can put two hot dishes of food on the table and prepare school meals for their children.

The regime has papered the city with the ruddy face of the German Pope, 86. If in Guanajuato, Mexico, where he was due to arrive on Friday 23, he wanted to talk about the violence and poverty that plagues the Aztec nation, his visit in Cuba has divided the opposition and exile. The Ladies in White and dissidence have requested a minute of his attention.

The Cuban Church’s response is that his agenda is very full. But there will always be room to chat with Fidel Castro. If, in politics the Pope’s visit has sparked controversy and social apathy, we add to that now the insane, beggars and people without papers to reside in Havana, who want the Pope to climb the steps of his plane as quickly as possible and fly toward the Vatican.

If there is anything the beggars and dissidents “of the barricade” agree on, it is that this papal visit has brought more harm than good.