HAVANA, Cuba , September 2013, www.cubanet.org.- He was the most in love Cienfuegan I knew. He was called Oscar Manual Espinosa Chepe, although to most of the people who knew him he was simply “Chepe.” His Dulcinea, Miriam Leiva, was at his side over the last thirty years with a loyalty tested in the harsh conditions imposed by the Cuban dictatorship. Both were driven from their important positions, and later Chepe was condemned to twenty years in prison during the Black Spring.

I met him when he was in his sixties. He was already an accomplished economist. Friend of the truth, he had a small space on Radio Martí to talk about the island’s economy. He was published in Cubanet, Cartes de Cuba, Disidente and CubaEncuentro. He had written a couple of books, and his opinions and judgments were listened to by all analysts of the Antillean situation.

Soft-spoken, like an asthmatic, and unstoppable. Each one of his words and reflections vallued in gold. He never interrupted conversations and loved to tell stories of his trip to Yugoslavia as economic attaché to the Cuban embassy in Belgrade.

Born in an educated cradle in the Pearl of the South, his parents, Oscar and Clara, were degreed professionals and had a pharmacy frequented by the “good” people, who knew the quality and reliability of the service, and popular among the common people, because they knew they would find solidarity and help.

With these virtues in the home, he grew up knowing the potential of republican democracy and took advantage of it. Full of courage and patriotic enthusiasm, he joined the 26th of July Movement. For his actions, he was tried in Santa Clara and absolved by this “cordial republic,” that saw no danger in his ungovernability, and by the good offices of the then attorney and Commodore of the Cienfuegos Yacht Club, Osvaldo Dorticós Torrado, who later would become President of the Revolutionary Government.

The “Revolutionary dawn” found him immersed in the tasks of the “process.” Although he had visited Havana from a young age, he decided to settle in the great city due to a proposal from a fellow countryman to work in the recently created Ministry of Foreign Trade (MINCEX, 1961), an entity supposedly created to meet the needs of the Cuban state to assume the management and control of imports and exports. His knowledge and daring made him stand out, but at the same time they reprimanded him and sent him from his work at the Infanta and 23rd building to rough and complicated places, where he was meant to reform himself. It was in one of those places where he contracted an intestinal illness which marked his entire life.

On returning to his offices, after being “Revolutionarily re-educated,” Chepe revised his scale of values. He continued his economic studies and concentrated still more, and from his own perspective and vision, on the analysis of the national economy. For these efforts he was expelled from MINCEX in 1984, as stated in the act of the trial of the 75, and gradually he became a member of the pro-democratic groups and participated in the independent press as an economic analyst who was a reference point for everyone.

Chepe has died in Madrid, far from his beloved homeland. The generation that knew him will remember him forever. Rest in peace. 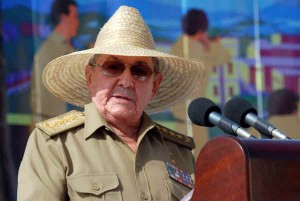 HAVANA, Cuba, July 26, 2013, www.cubanet.org.- Like every five years, the most important celebration of the revolutionary calendar, the  assault on the Guillermón Moncada Barracks in Santiago de Cuba on 26 July 1953, returned to the most Caribbean of our cities. The protocols and extreme security measures that accompany Raul Castro Ruz looked ridiculous in the middle of the overall apathy of the population affected by the severe economic crisis affecting the country and especially the east.

Low wages, serious unemployment, underemployment, school dropouts and migration to other provinces, together with the impact of a hurricane last year that affected many houses, are the most important reasons for Santiaguans are not interested in the celebrations. With all this the authorities were determined to inaugurate monuments, including one dedicated to Juan Almeida, or allocating billions of dollars to the restoration of the Plaza Antonio Maceo, to restoring road signs to give an image of normalcy before the visits of foreign politicians.

Ten thousand Santiaguans, according to official figures, were designated to be in the great square of the old Moncada barracks, now a school, on July 26, escorted by a large photograph of more than ten yards high of Fidel Castro Ruz, leader of the failed assault.

And if a particular feature is the spectacle this time, it is the large presence of Latin American and Bolivarists presidents. 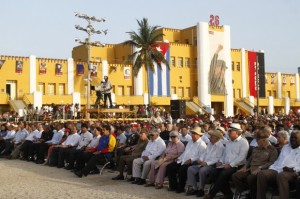 The foreign political speeches marked by anti-Americanism, and the exaltation of  “Cuban solidarity,” became a marathon “relay race” that lasted for more than two hours.

It is speculated that such rhetoric is intended to build consensus abroad, following the incident of the Cuban ship carrying weapons to North Korea, making it the unwelcome guest of the political spectacle. And toward the interior, given the difficulties faced in implementing the reforms.

I turned sixty, and what do I have?

The General President Raul Castro Ruz, keynote speaker, in a short speech he read, promised that the State will ensure the development of the city of Santiago de Cuba, destroyed after Hurricane Sandy (October, 2012), which lost 50% of housing stock, as well as suffered extensive damage to communications infrastructure.

He then offered a triumphalist reconstruct of the events of the last sixty years. And he referred to the process of delivering, gradually, the responsibilities of government to another generation of communist leaders. Of new challenges, not even a word.

However, not everyone agrees with the triumphalist epic vision repeated by the government through the media about the assault on the Guillermon Moncada Barracks.

Jorge Hernandez is the shopkeeper in my neighborhood in El Vedado. A newly emigrated black Santiaguan who, when asked about the significance of the 26 July 1953, and the assault on the Moncada Barracks in Santiago de Cuba, he passed his hand over his head, looked me straight in the eye and without blinking said:

“I turned sixty and what do I have? … My life is already passed and I have nothing. I was born the year of Moncada in San Pedrito. As a child and young man, and until much later, I thought as I was told, that the Moncada assault opened the way for me. But at sixty, I repeat the question: What do I have?”

Pepe, a neighbor, a veteran of the 13 or March Directorate, almost eighty years old, imprisoned several times in the Castillo del Príncipe, for his revolutionary and anti-Batista activities, is less radical in his perception:

“The Revolution was something very beautiful, but unfortunately was betrayed, when the Communists made a clean sweep and lost their Catholic essence, that was the responsibility of Fidel Castro, who seized the that we had gotten with so much effort. For a long time, the celebration of the Assault on the Moncada was for me a special day, glorious. Today is just a sad day, to see what is left of our dream and at my age is hard to see how this will end.”

However, Alfredo, an economist currently working in Luanda, Angola, for the military corporation ANTEX, thinks that Moncada was a defining moment in the history of Cuba, which proved the genius of Fidel and the Cuban revolutionary spirit:

“We have a new Moncada ahead, and it is to support Raul’s requests on the need for social discipline, to carry out the guidelines of the National Party Conference (the communists), in order to make socialism sustainable and especially to internationalize the campaign to free our Five (now four) Heroes imprisoned by the empire.

In Santiago de Cuba, on the old road from Cobre, Guillermo Espinosa sees the matter from another point of view. Besieged by the political police, he hasn’t been able to leave his house since July 23, because they are threatening him to arrest him the minute he sets foot outside. According to him, the majority of Santiago’s democrats have been arrested or detained in their homes, as they did on the visit of Pope Benedict XVI, in March of last year.

To Guillermo, 45, the assault on the Moncada Barracks was the continuation of a cycle of violence that began in the Republic and has not yet ended.Because the so-called revolution established a military dictatorship that deprived the people of all freedoms.

“Sixty years later,” he says, “the country is poorer in the economy and in spirit. The calls for economic measures are an aspirin for a body already sick unto death.”