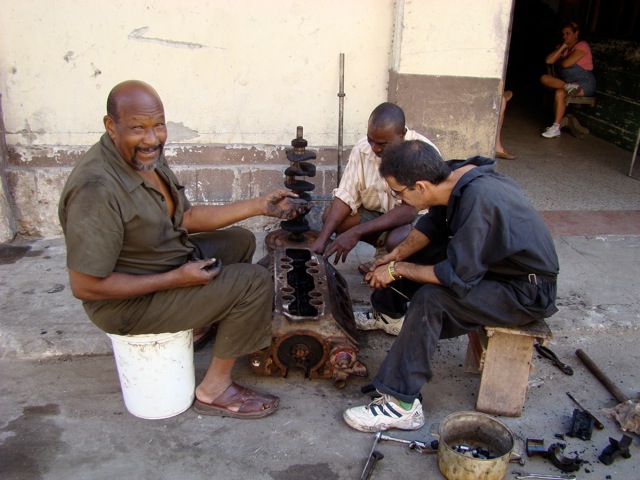 A common site in Cuba — keeping one of those old engines running.

In Cuba, there are many things we take for granted and count on for ourselves and for the world as settled matters, normal in how they work, but in reality they are obsolete things, of poor quality and even dangerous or extremely harmful to our health.

Most people don’t realize it because our level of development is so low, so in terms of appreciating the quality of the things around us, almost anything available for subsistence satisfies us. There could be thousands of examples, perhaps millions, because every Cuban could offer several related to his or her own environment and experience.

This time I will address an issue that illustrates some of this insidious reality: cars.

The equipment that is considered ordinary cars in Cuba could not circulate on the streets of any country at a certain level in the world, unless it were for an antique show. Much less if the country is proud of being a tooth-and-nail defender of the environment. The same goes for almost all the motorcycles, most of which are two-stroke (banned for years by international protocols).

An American vehicle of the ‘40s and ‘50s circulating on our streets leaves a trail of black smoke in its wake that contaminates more than 100 modern cars would, worse than the ones the Chinese make, and what’s more, since they are practically the only ones in the country in private hands, their sale prices are enough to make you die of sadness.

An American “almendrón” (the old cars used in private shared taxi services), reasonably maintained for its year, with an adapted gas engine, can easily cost 25,000 to 35,000 CUC and more, a figure that is even higher in dollars. A Soviet made motorcycle with original parts no longer exists, but would have been almost completely reinvented thanks to Cuban ingenuity, and could be worth between 2,000 to 7,000 CUC, depending on the make.

But a simple search on the Internet will show you how many cars — modern, economical, ecological, safe, and above all “cheap” — can be purchased in international markets. There are even places where you can buy a used car manufactured after 2000 for $300, which would be a dream for any doctor, engineer or teacher in Cuba. And it’s the same thing with motorcycles. 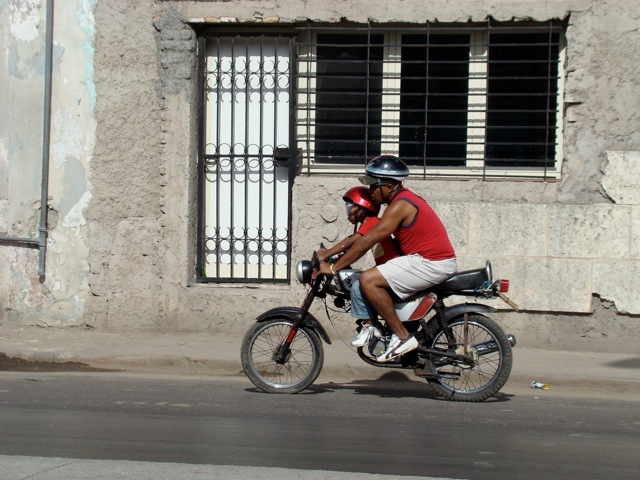 Recently I saw an ad for a 2011 Italian Lambretta, a top flight bike of world-renowned quality and durability, for not more than 800 Euros, which is less that a Karpaty would cost in Cuba which, along with the Berjovina, is the worst motorcycle made on the face of the earth, though every day they carry thousands of Cubans all over the place, at cost of spending all your money on it, constantly “babying it along,” living covered in grease and permanently pissed off because anything can break on it anywhere, such that people have nicknamed it “prison sentence”; and still it’s a privilege to have one at a price which very few people can afford (800-1,700 CUC).

But the issue also involves the subject of fuel, which in spite of all the treaties and the “integration” with countries like Venezuela where, according to Cuban doctors themselves — who are serving on overseas Missions there — “water is more expensive than gasoline”; the fact is that in Cuba fuel prices are rising and according to some Europeans with whom I’ve talked it is more expensive than in their countries.

It’s crystal clear that the greatest institutional fraud is the fact that as Cubans we have to pay much more for almost everything, it being more expensive here than anywhere in the world, while, paradoxically, we earn the least money for a month’s work.

This is a topic that the “people’s representatives” never seriously addressed at any conference of the Party or the National Assembly. It is very clear that those who don’t sleep thinking of our welfare and our development will not face these problems because with the money that is left over after paying an entire people, they are able to buy very nice and comfortable cars, as well as the fuel to go from meeting to meeting in their very clean clothes, not squeezed in with people of all kinds, without sweating their lives away, without losing their health breathing the carbon coming from the bowels of one of those priceless truck-tractors (being operated as public transport) that are imposed on ordinary Cubans. Then there is the TV spot that speaks of the danger of exposing yourself to secondhand smoke…

The truth is that since the year 1959 no Cuban can go to an agency and buy a car normally. The State is the only one who has this privilege and it takes advantage of it to “work” more efficiently, for example, the thousands of men the government has to better monitor — from their modern and comfortable transport — each sheep in the flock who is traveling on foot.

Our people have a right to demand that companies around the world come and sell their equipment directly here. And also that this happens because they pay us according to the standards of the international economy in which a worker (and more if they are professionals which a great number of Cubans are) can have a decent vehicle to get to work and take care of the problems and necessities of life.

The word “safe” is very important in this issue; we all know that accidents have become one of the leading causes of death in our country. But how are they not going to kill people traveling on top of each other  crammed into pure iron crates without the slightest guarantee of safety! That, coupled with the deplorable state of the roads and the age of the aircraft fitted with homemade inventions “to keep them flying” is a perfect combination to kill yourself. But the Cuban government seems to only see the responsibility of drivers.

The saddest part is that the propaganda and all the mechanisms of government do not allow people to realize that this one-party system is the permanent barrier that will not let us develop and access the vast store of progress and benefits we could achieve with an open, participatory and democratic society.

It is a mortal sin and suicidal for us and for future generations not to see that everything, absolutely everything, happens because of politics. If we don’t change the way we do politics in Cuba, we cannot change anything, we cannot have development, progress, the public good, respect, tolerance, peace or happiness. We will always be backward and hungry and in the end in hell, where we have already lost a good part of our lives and are threatened with losing them completely.

This text was published in Spanish in the blog Penultimos Dias, courtesy of La Cubanada social network which will bring weekly chronicles from this author.