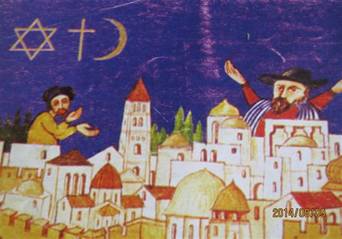 In recent weeks the Palestinian issue, and specifically what is happening in the Gaza Strip, has captured the attention of the media. Over here the image shown is that of poor peaceful Palestinians attacked and brutally slaughtered by the bellicose Israelis.

Violence is good for no one and should be avoided, because it only causes pain, suffering, destruction and death, wherever it comes from. The solution of settling differences and contradictions through peaceful means has always been more intelligent, although it is much more complex. Unfortunately, in the Middle East historically, that has been very difficult if not impossible. This land has been prodigious in expulsions, returns and new expulsions. The blame is equal on all sides.

As long as it is not accepted that two nations with  different customs, cultures and religions can live in the same territory, peacefully and with mutual respect, there will be no solution and the victims of both sides will continue to increase, because the impact of a Palestinian rocket on Israel is lethal, as is an Israeli bomb dropped on Palestine. Both kill and both kill adults, old people and children of both sexes equally and without discrimination.

The reality is that during the many years that the Israelis have been working tenaciously to live in a civilized way on the arid ground beneath their feet, the Palestinians have been engaged in war not only in this region but in other regions of the world. The examples of their combatants enrolled in foreign wars are well-known, although they try to hide it.

Today the Palestinian economy doesn’t exist because it has never been created and the majority of its resources come from Israel, where thousands of Palestinians flock each day to work in the companies and factories, or to provide various services. Israelis need peace to continue to develop and so as not to have to spend so many resources on armaments, but the Palestinians also need peace if they want to survive as a people and a nation.

To achieve this it is essential to stop fanatically following so many fundamentalist messianic leaders whose only objective is to maintain themselves in power on the pedestal of martyrs.

The images of Palestinian children confronting Israeli tanks with stones has been spread far and wide and has been cleverly used as propaganda, while hiding the image of the Palestinian rockets falling on Tel Aviv and other cities along with the bombings in malls, discotheques and public transit, as well as the kidnappings and assassinations

The cause of a helpless victim confronting a powerful aggressor, despite the years, still generates sympathy, but the terrible thing is that there is much that is false and confusing in that image.