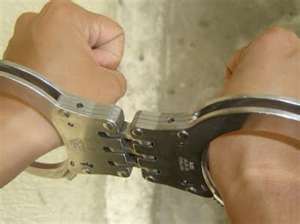 I’ve spent some nights now trying to talk to the wife of Ariel Arzuaga, a defender of human rights in the city of Bayamo, in Granma province. He is currently imprisoned because of the malice of the local military authorities.

Yakelin Garcia Jaenz worriedly told me that Ariel remains in a very poor state. He is now confined to “Las Mangas” Provincial Prison, and being kept in the area of those who have pending trials. He is being accused of “assault”.

Ariel Arzuaga’s suffering began on February 23rd of this year, 2011, when he was on his way to pay tribute to the memory of Orlando Zapata Tamayo.

“We had a funeral garland in the house, but the political police agents Julio Cesar and Abel violently barged in. They tore down the door and told us that we were not allowed to leave our house. That’s when Ariel went out to the street and told them what they were doing was a violation because there was a child in the house that had to go to school and they were stripping that right from us”.

“I ended up taking my son to school and they took me to prison. Ariel stayed at home taking care of our 2-year-old daughter and they started to accuse him. They were saying that he wanted to kill our girl, which is a huge lie. The Special Brigade entered our home through the bathroom window and seized Ariel. They twisted his arms in a lock position, they grabbed his neck, and then dragged him to the MININT Delegation located on the road to Santiago de Cuba. At midday, they moved him to the Instructional Police unit where he was kept until March 11th, where he declared himself on hunger strike from March 9th”.

“On March 14th, while he was out on the street again, he tells me that around 5 pm he was verbally and physically attacked by a paramilitary officer who had also been present during the February 23rd demonstration when he was detained. This man really attacked him and screamed at him: ‘Worm! Counter-Revolutionary!’ and other obscene words. Ariel, according to what they tell me, simply got off his bicycle and that’s all. He was later detained on March 17th and has been behind the bars to this day, which is soon going to be a month exactly. He has been kept in the Las Mangas jail in Detachment 1-2”.

“Today, I got to visit Ariel there. He told me that Major Joel had informed him that he could no longer use the phone every three days as is the norm established for common prisoners. They also informed Ariel that family visits will no longer be held in the salon but somewhere else and separately”.

Ariel Arzuaga Peña lives in 21 Street, No. 12-A, e/12 and 14, in the Ciro Redondo Housing Complex, Bayamo, Granma. He is the director of the local “Light and Truth” Human Rights Center and is the President of the Opposition Municipality. He is also an activist of the Eastern Democratic Alliance.