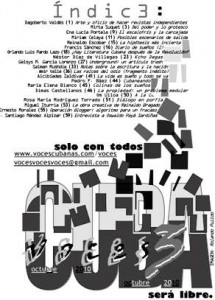 Translator’s note: The translation of this post was delayed; Voices 7 is now out.

Friday night, November 12, was one of magic and joy for the sponsors and witnesses of the journal Voices, developed since last August by Yoani Sanchez, Reinaldo Escobar, Luis Orlando and other creators from the Academy Blogger in Cuba, who distributed dozens of copies of the third issue published by the portal Voces Cubanas, posted on
www.vocescubanas.com/voces
and vocesvocesvoces@gmail.com .

We are again faced with a challenging script with cultural pretensions, which promotes communication without censorship and commitment to freedom of expression. Internet as a medium for emerging voices, expatriates, those silenced or under suspicion, but with a civic sense and desires to cast off their fears and play in the big leagues; confident that the island is a mini interconnected universe and the nation a space for building and reconstruction with a seat for everyone.

The third issue of Voices, as the previous installments, breathes freshness and originality, and offers texts from 20 authors ranging from poetry, social essay, literary and cultural chronicles and newspaper interviews, narrative and texts that lead to dialogs and reflections in turn on literature and some of the daily problems of the country, although the collaborators avoid party phobias and concentrate on selected themes and figures, bringing their own polyphonic diversity to the magazine, where we can appreciate creators from “inside” and “outside” the island.

The index, true to the simplicity of the issues of August and September, have no sections, footnotes, author bios or editorial notes. The layout and design and play games with letters and digits, creating evocative spaces, use the illustrations of Claudia Cadelo whose female figures adorn the inside and back, in counterpoint with a photograph of the dome of the Presidential Palace, by Orlando Luis Pardo Lazo, writer and photographer, a friend of allegories and ruptures.

To Luis Orlando we owe “Is there Cuban Literature after the Revolution?” (P. 18 to 22), an essay of dazzling insight and critical sense, whose question — and obvious answer — seem echoes of questions embroidered by unease and calm unraveled by the author himself. In this tone of indignation is “Kcho Degas” by Néstor Díaz de Villegas, who enriches one of the angles of Cuban culture: the counterpoint of slave master, illustrated with black poet Francisco Manzano and painter-artisan Alexis Leyva Machado (Kcho), who “lends his mask to the dictatorship” and introduces in his discourse the “false consciousness of the overseer.”

Adding the cultural disquisitions Dagoberto Valdés (“Art and craft of making independent magazines”), Mirta Suquet (“The power and the grotesque”) and M. Gelsys García Lorenzo (“Underground: A trash article”), while Alcibiades Zaldivar (“Life is a dream and everything goes,” about Benny Moré), Ena Lucia Portela (“The chill and the laugh,” about Reinaldo Arenas) and Miguel Iturria Savón with “The creative work of Reinaldo Bragado,” an incursion into the spiritual memory of the nation.

More tricky are three short essays that probe the sociopolitical situation in the islands. Its authors are Miriam Celaya (“Cuba: potential exit scenarios”), Dimas Castellanos (“Property: A fundamental problem”), and Rosa M. Rodríguez Torrado (“Dialogue in contention”). For sharpness, latest news, proposals and scriptural balance these reflections deserve attention from readers, especially the “approach to the subject” by Miriam, complemented by “The hypothesis most uncertain,” by Reinaldo Escobar, on the impossibility of the socialist utopia.

Poetry is represented by Maria Elena Blanco (“Hill of Dreams”) and Peter F. Báez (Cubanness), while the narrative, well served, bears the mark of Francis Sánchez (“Diary of Dreams”) and Amir Valle, who offers an unpublished fragment of “The roots of hatred.”

Of great interest are also the “Notes on writing and the nation,” by Salman Rushdie, an Indian writer in exile in England, and two pieces of journalism to recapture the Cuban reality, the “Interview with Oswaldo Paya Sardinas,” by L. Mendez Santiago Alpizar, and “Operation Blogger: An Algorithm for a failure,” by Ernesto Morales.

With its third installment, Voices faces the dual challenge of any periodical posted in cyberspace. What about the audience? Will is creators awaken the consciousness put to sleep by disinformation? Will the magazine maintain its professional level? There are reasons for optimism.