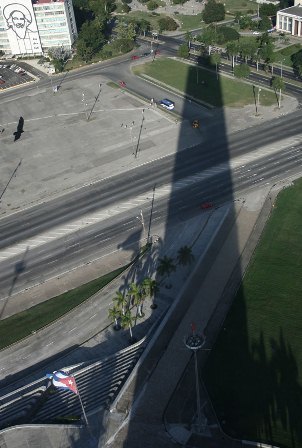 The presence of the voice of a priest on television during the celebration of Mass, the opening words of the Pope, rendering thanks to his welcome, “the Church must earn a place in the public space”, the presence of the faithful, in the streets, in recent months to venerate the image of the Patroness of Cuba, suggests that the negotiation of the Catholic Church with the Castro State already has a purpose.

To allow the Catholic Church to open schools, at all educational levels, is a dream for a mother like me. I would prefer, a thousand times, the puritanical and elitist education of the Church, of our children and youth, rather than their being educated in the revolutionary pantheon doctrine. But any negotiations require concessions and these seem to be, as we have been told by the priests in advance, the removal of believers from public political life.

There can only be the Communist Party, to be in the opposition is still a crime, is based on human rights not from the perspective of another party. This is a betrayal, but the Pope is not Christ. What seems to be the commitment of the Catholic Church in Cuba, in 2012, is not the love of John Paul II for the Spring.

Let us assume that Benedict XVI is betting on the proclamation of the Gospel. What will young people do with the Gospel, with inner freedom, when they come out of the Temples? It could happen as it did in the ’50s, when it was easy for Cubans to relinquish their religious school training, because they believed that priests were hypocrites.

The Catholic Church in Cuba was more credible when it was the Church of resistance to the materialism of the ’60s, ’70s and ’80s.

I believe in Jesus Christ in the style of the Apostle Paul. So I could not object to the Pope’s homily, the only time of license for the priest because the rest are wanting to watch the liturgical prayer and that is really all, speaking strictly of the Incarnation of the Word, that is all to which I would listen, but in order to live in ecstasy and be like Christ in recognising that even after an arbitrary prison sentence of twelve years, the police are still holding Oscar Elias Bicet and his wife Elsa incommunicado by cutting off their cell phones during these days.

The Ladies in White, Gladiators, arbitrarily arrested, threatened and besieged. All hounded by the political police. I do not know about UNPACU (Foundation of Human Rights in Cuba), because they are in Santiago, but we clearly saw the actions of State Security which we all know were to prevent an opponent of the regime from reaching the Vicar of Rome. Perhaps His Holiness knew that fact and did not want that to affect the negotiations.

Ignoring these people that are now being denied and crushed by the state is — if not to condemn them to be abused by the political power — to underestimate them, to abandon them for reasons of business.

Perhaps I am mistaken, but all seems to indicate that this visit has a purpose but not a Universal purpose, but coming from an Inquisitor only considering the imposition of a doctrine of life as if it were an ideology. Since this doctrine is the only one, which I believe in more than in life, I justified Mr. Ratzinger not saying in his homily that to obey God before men is the road to liberty.

It would be absurd to suppose that he spoke of obedience to encourage the people to acquiesce to the dictatorship. All due to the “greater good”, the Church’s presence in public spaces, is not bad, but it is not enough.

Finally, I saw the image of the Crucifixion, now the symbol, and I happened to think of Christ as Judge, who alone can open the seals on the beautiful images of the last book of the Bible. God the Saviour, Son of the Father, genitum, non factum, consustansiabilis Patri, came to this world, became incarnate in the womb of the Virgin.

He became like us without what is called sin in the Bible, which among other things allows us to relate to God. He suffered the same as us, temptations, helplessness, but did not lose faith in the Father. Until Jesus Christ has made us the gift of being children in faith and the Holy Spirit, the Paraclete, that relationship was not entirely real or written on the heart.

For Nirvana and other higher state of consciousness seem mute and lonely before the eloquence of the Word. Even though, in fact, they express wisdom, they are impersonal. I know I sound inquisitive, but I will never be the police of someone who thinks differently from me. And I dare say that is completely unprecedented in the world of Christian revelation, because without indicting the pictures that have been made of God in different religions, the Incarnation of God is the heritage of Christian doctrine only.

The other founders of religions have participated in a higher deity, has been made corporal in the conscience of the ascetic, but God Incarnate was born only in the manger of Bethlehem. In heaven there is but the Trinity of one God, is the testimony of Christ and the contemplative tradition of the best Christian mysticism, it is not, as the atheists say, a heritage of Hindu trinities. Assuming the lineage of David, earthly parentage has given us a heavenly and indestructible life, resurrection, the knowledge of God through faith and one day by the Spirit. And being the only innocent, and the source of all the gifts of those who could participate, he was killed, tortured by the violence that we are capable of. That cross is our judgment and incredibly our forgiveness. Tertullian, apologist, coined the phrase: Credo quia absurdum.

There is in fact an exclusion in the apostolic doctrine, but such a faith would assume tolerance and respect, although from the inquisitorial behavior of the Church, over the centuries, is the model that has been copied by the totalitarianisms.

There is a point that consternation produces in me, as a believer, and it is the alliance of the Communist totalitarianism with Catholic inquisitorial doctrine. It would be a travesty that human beings more advanced than the “Aryan” and the “New Man”, would endanger the Christian doctrine of salvation. I hope that I am wrong in my assumptions and that my blog, Jeronimo, is not heckled for not being right. I do not know if the Pope knows what he has done.

Everything was much simpler in the apostles, in the person of Jesus of Nazareth, and I miss him very much, although we know calmly that everything will pass except for the Easter victory.

Therefore permit me to repeat the disillusionment that Ratzinger causes us with the same words used by Teresa of Avila: God alone suffices. The cause of the Spring for Cuba should not be abandoned by Him.