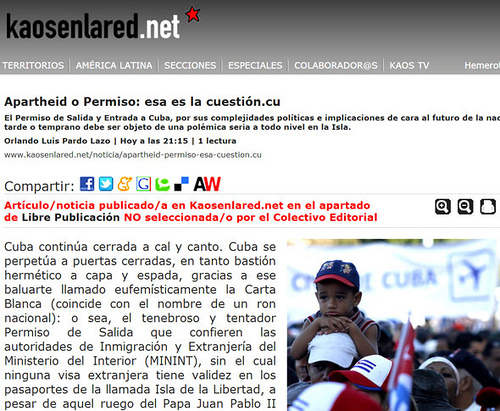 Cuba remains closed, lock stock and barrel. Cuba perpetuates closed doors in such a swashbuckling hermetic fortress thanks to that bastion euphemistically called the White Card (which coincides with the name of a national rum): that is, the dark and tempting Exit Permit that the immigration authorities and the Ministry of the Interior confer, without which no foreign visa stamped in the passports of the so-called Island of the Free is valid, despite the pleas of Pope John Paul II on his historic visit of a 1998: Let Cuba open itself to the world and let the world open itself to Cuba.

The Exit Permit is now one of those bureaucratic fossils of the Cold War that, unfortunately for the Havana government, from the past century and millennium, has already exhausted its narrative of “under siege” in the face of global imperialism. Workers exploited by the capitalist system occasionally manage to save and reach our luxurious shores. However, here, at the turn of a populist — but wearily fifty-year-old — Revolution, we see the builders of the tropical utopia on Earth humiliated when it comes time to sniff out the rest (or the remains) of a world corrupted by the market.

It was only in the most recent congress of the Cuban Communist that someone in high places recalled that the concept of “tourism” did not exist for nationals. Every Cuban who wants to travel must ask for a Letter of Invitation, or Work, or Inheritance, or Marriage or Et Cetera. And this is just the beginning of their very expensive paperwork in hard currency (hundreds of CUCs), where at the end of all the forms awaits the will of the olive-green suit of an anonymous official who, in most cases, may make the Yes or No determination without further justification.

In the worst cases (the political pests of the half-proletarian-half-despotic paradise) they never notify that Cuban whether he may or may not travel. Examples abound (there’s even a blog that enumerates them), although the majority of people prefer to remain silent, because it’s assumed that an internal claim (or public protest) would only further torpedo any hope of leaving in the time of Socialism.

Professionals are the most affected in this regard. They must wait years and years for a ministerial resolution to “repay” the State for their university degrees that are supposed to be free. Soldiers and others serving in strategic services can’t even dare ask for the Permit, without compromising their careers.

The most humble people cling to an oar on an air tank or catch a speedboat paid for by their families in the United States. Cuban intellectuals don’t even discuss this so critical topic, because normally they behave correctly in their works, as they do manage to get the Permit thanks to their institutions, so the (bad) luck of any debate on it is unlikely to happen on today’s Island. Those who know, don’t want to. Those who want to, can’t. Those who can, don’t know.

We are all a bit complicit in this injustice, because we all ask them to forgive us our sins every time we ask for the Permit to enter or exit. To work outside ones borders is desperate recourse for many of the poor people in our region and in the world. To work within our borders can be a much more denigrating options for the Cuban who knows he has no other choice.