Crushingly, even the elementary school textbooks still repeat in Cuba today the media coup of Fidel’s phrase: “In 1956 we will be free or martyrs.” From the mouth of someone convicted of armed rebellion, it was little more than a threat. In fact, it was a battle cry against the then dominant national security.

As the months ran out nothing happened. Fidel reiterated his slogan in articles published here and there. He played it in public, but in fact he was running out of time. The year was nearly gone. And the young exile didn’t want to call for his own suicide, as Eduardo Chibas had done when he couldn’t stand behind his word in front of the whole country.

It was a time of facts and acts, when the word (as in Genesis) was freely convertible into real events. To speak was the most cunning weapon. It was a moment full of players and soon death would play a starring role.

Today, in contrast, everything seems to have a less foreboding tone, a muted urgency, survivable without great effort. Fortunately or unfortunately, the leaders in Cuba have lost their ability to manipulate tomorrow (politics here is the art of the past). Whether on the official side or from the opposition, all are a puppets of the precarious present. It’s as if the customary fatigue prevents them from raising their heads (and, on consequence, their vision). So now people can afford the luxury of accepting or ignoring this or that discourse, always without over involving themselves. At the end of the day they are just that: discourses (the blah blah blah of barbarism).

For the powers-that-be the euphoria of their aesthetic statistics is no longer enough to create consensus. Nor are their peregrinations in the streets or their digital pamphlets enough for the opposition. In the end, all change is violent.

So, to break this infra-national homeostasis, we need to bend the chronological curve of the Cuban Revolution, anachronize its process, arm another narrative machine of equal effectiveness (falseness). Invoking, for example, milestones of heroism unimaginable up to the moment of their utterance. Give dates and them meet them with heroic rigor (the rhetoric of rigor mortis).

Each jail cell or cadaver called (not necessarily the actors, but first of all the public) will then be a bit of change. Only such theatrics can draw back the curtain of tedium, making our story plausible to the media of the world. Ah, but will the peaceful opposition be able to pull off such a script banishing the despotism in real time? And to what extent would it result in the power to keep alive the idyllic novel of its unique voice?

One young leader survived 1956 without liberating anyone around him that year. We already know that promises will not be the most important, but the greatest impact.

The years have nearly run out. 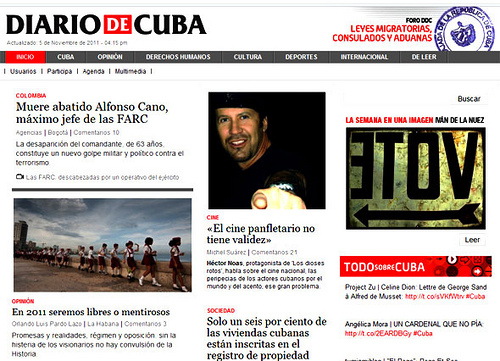