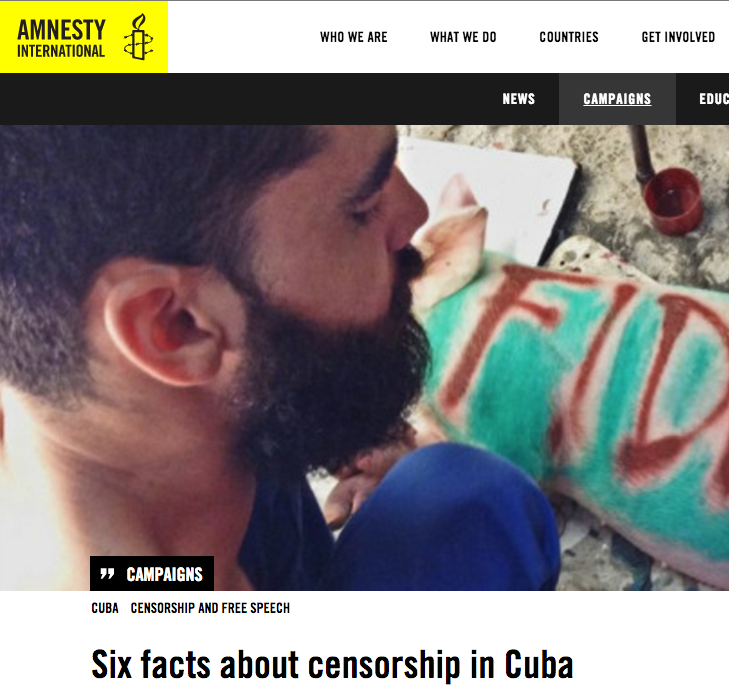 14ymedio, Havana, 13 March 2016 — On the occasion of World Day Against Internet Censorship, Amnesty International (AI) has published the obstacles that Cuban internet users must overcome to access the web and break the blockade against web pages that dissent from official policy. Under the title “Six Facts About Censorship in Cuba,” the note addressed the limitations on freedom of expression in digital, artistic and informational spaces for residents of the island.

Among the major violations listed by the report is the lack of freedom of expression exemplified in the imprisonment for ten months without trial of the artist Danilo Maldonado, known as El Sexto, when he attempted to stage a performance art piece with two pigs on which he had painted the names of Fidel and Raul.

The human rights organization denounced the state monopoly on the media and the harassment of independent journalists and bloggers. The note recalls the police cordon around the 14ymedio newsroom, to prevent its reporters from covering the activities of the International Human Rights Day, on 10 December.

Censorship on the web and low connectivity are also addressed in the document. “Internet access is still prohibitively expensive for most, and far from accessible to all,” it says. Despite the appearance of dozens of wifi zones and navigation rooms, “only 25 per cent of Cubans use the internet, while only five per cent of homes are connected,” denounces the text.

“The landline, mobile and internet connections of government critics, human rights activists and journalists are often monitored or disabled,” says AI, for whom these actions are “a clear breach of the right to freedom of expression, including the right to seek, receive and impart information.”

The difficulties faced by international agencies to access independent information is also reflected in the document. “Communicating with Cuban human rights activists remains challenging, particularly at times when the authorities are arresting people based on their political opinion.”

According to the organization, Cuban citizens are “finding ways” to circumvent censorship and share information “From underground Wi-Fi, to creating apps, to harnessing the power of USBs.”

Amnesty International is a global movement, with a presence in more than 150 countries that aims to “undertake research and take action to prevent and end grave abuses of civil, political, social, cultural and economic rights throughout the world.” Cuba is the only country in the continent that does not allow access to Amnesty International, which has been unable to send an official mission to the island since 1990.