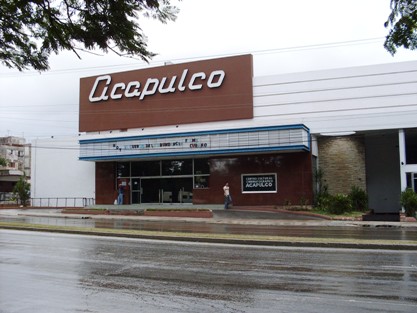 Last night I went to see Esther en alguna parte (Esther somewhere), Chijona Gerardo’s new film with a script based on a play of the same title by Lichi Diego I have not read. At the risk of screwing up, I imagine a Borges aura around the Lichi’s story, but the movie, with a splendid cast, is a succession scenes where Reynaldo Miravalles and Enrique Molina are marvelous, despite the awful sound dubbing and the darkness of the copy, technical defects added to the artistic defects that I truly regret, because the “old cinema” is a rara avis and I think Chijona missed a great opportunity.

It was not the first time I went to see the move. The day before the premiere, I tried to go to the six o’clock show but the theater administration decided not to open the door for me and another lady and someone else who had gone before. Last night we were more than twenty people.

A vague sensation of being at the end of an era that I had already glimpsed when I sent to see La película de Ana (Ana’s movie) materialized last night in the Acapulco. For having always lived so nearby, this theater has been my theater. From children’s matinees on Sundays, I’ve attended its successive transformations: when candy was sold from a rounded display case just next to the stairs leading to the offices; when the fifties amoeba-shaped glass on top of the facade was replaced by another on the side by the parking lot; when the phone booths disappeared from the upper floor; when the children’s potties that were my delight as a little girl and they I complained to my mother about not having at home disappeared; when the annex bar-cafeteria (which I was never old enough to enter) disappeared and reappeared much later as a video room, or when in the same place they opened a video rental (I think it still exists).

I waited for the credits to finish rolling, and when the lights came on I could see the deterioration of the carpet and the lower level, and I could see a couple of bats, restless under the sudden light. No, it wasn’t dirty, I mean, dirty with trash left by messy visitors, because the dust has made my movie theater its home. The bathrooms I haven’t entered in years, those clean well-lit bathrooms that were as clean as any public bathroom in the city.

Defeated by the film and the vision I’ve just described to you, I returned home with my husband commenting that not long ago I’d seen the Acapulco on the list of the ten most important (?), singular (?) of the world, I can’t remember why it was listed, but except during the Film Festival or some premiere, the Acapulco languishes, waiting for times better or worse, but definitely different.