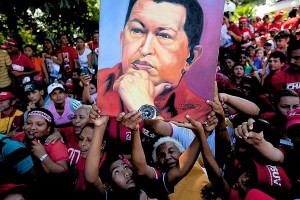 On March 5 Cuban TV aired the speech of Nicolas Maduro, the Venezuelan vice-president, where he announced to the world the death of Hugo Chavez; the perspective of Cubans turned toward the future, one that many perceive as tragic with regards to the economy, and that others perceive as hopeful from the political point of view.

The same thing is happening in Venezuela on a different scale. Cubans today share the only equality Socialism can provide, which is powerlessness against the Socialist State. In the Venezuelan case they have not yet reached the point where it is difficult to reverse; they are still going through the seductive chapter of the process.

In Maduro’s speech he emphasized the word “peace” in the doubtful context of the simultaneous announcement of the “deployment of the Armed Forces and the ’Bolivarian’ Police’” to “protect citizens and ensure peace and respect,” making ourselves into “vigilantes” (of peace). Again Maduro reiterated the same word, inviting people to “channel the pain in peace,” calling for the mobilization: “we shall gather in the squares, the people and the Armed Forces.”

In Cuba, there was not a single statement of opposition to Chavism in Venezuela to be seen. Despite the multi-state TV channel Telesur transmitting 24 hours on the Educational Channel 2 on Cuban television.

The mention of the opposition is always associated with conflict. In the broadcast of the March 7, in response to the question, “How is the country’s security?” a General answered, “On the alert, (the opposition) will always be conspiring,” adding, “all the people are in the street defending the Revolution,” and once more he spoke in terms of “deployment” of the intelligence services and the military.

Cristina Fernandez, Argentina’s president, told Telesur: “This extraordinary concentration ratifies the massive support for Chavez,” referring to what the broadcaster defined as the “red tide” that accompanied the presidential coffin to the Military Academy where his wake is still being held, for 7 days.

More disconcerting still was the statement made by Nicolas Maduro about Chavez’s body, that “it will be embalmed, like Lenin’s.”

The propaganda of “21t century socialism” affirms that it intends to empower the people, down to the very poorest. For Cubans this hasn’t meant anything other than giving up all human rights, in return for receiving – as the crowning achievement of the utopia – a good ration of food, education teaching you to read and write, but which doesn’t favor your learning to think with liberty of conscience, and medical services.

That is to say, social security – which should be the function of any State whatever its political color – in exchange for liberty. Look at the almost religious exaltation of the leader, the emotional link, the comparison with “a father”, which will guarantee on a long term basis the complicated psychological phenomenon of a people submerged in slavery.

In the same way that in socialism (Leninist, Castroist, Chavista) the right to political freedom ends up exterminated; the same applies to economic freedom, because of their close relationship.

Using an allegory, the inclusion of what is called “21st century socialism” there is nothing other than an opening the mouth of the bag to the size necessary to take in more people and, eventually, the majority of votes in the elections (only when the members of whatever Socialist politburo feel obliged to organize free elections); after which, when everybody is inside the bag, the State terror will start to seal up its mouth and the end product will be comparable with the inscription which appears at the entrance to Dante’s “Inferno”: “Abandon hope all ye who enter here”.

Venezuelans perhaps still can’t understand that the cult of the leader, alive or dead, establishes hideous social relations between those in power and the public which has been shaped to believe, and to ensure that all popular opinion believes, in a false idyll between the two parties, which results in just one power – the State. They still can’t understand that peace is in conflict with surveillance. And that one day they won’t have the freedom to choose.