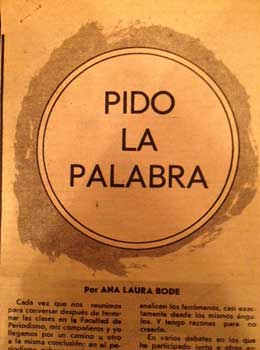 Each time we get together to talk after class at the School of Journalism, my comrades and I, one way or another, come to the same conclusion: Cuban journalism needs a change. Change that seems imminent following the Congress of the Cuban Association of Journalists (UPEC).

To consider that in the mechanical repetition of whatever model, Cuban or otherwise, we will find the solutions to our problems is obvious nonsense. For Martí, “the souls employed in the comfortable repetition of discovered truths are to blame.”

In whatever latitude, the truth should be respected, as there should be an aversion to accommodation. What varies from nation to nation (even from man to man) is the truth to be told, the causes to unravel, the paths to resolution.

There are only two possibility: to be in combat or out of combat, regardless of the name we give the standard of the struggle. Due reflection allows us to fight what for us is contestable; this is, more or less, the same everywhere.

There will be no answers

There will be no answers as long as what is published or divulged in the mass media conforms literally to the opinions of the director of the newspaper. Controversy cannot arise in the analysis of economic and social problems, thus an indispensable premise for there to be discussion is the expression of and confrontation between dissimilar opinions and interpretations on the same theme.

I resist the belief that all of our professional columnists have the same opinion and analyze events from almost exactly the same angles. And I have reasons for my disbelief.

In several debates in which I participated along with other students from the Journalism Department and with journalists, I was struck by the different ways my colleagues interpret the Cuban reality and how, in expressing themselves, they show me that there isn’t one single and absolute thread of thinking.

Now, for all these opinions to take shape and move beyond our group discussions, there must be a space for them to do so.

The allusions to the real existence of these spaces in the Cuban press, from several press agency directors and by the comrade president of the UPEC in these debates, can’t fail but to delight me. (The publication of this article in the pages of The Cayman does not mean that this is the ideal magazine, but that it is the one where it was accepted.)

If each one of us must abandon a posture that belongs to a not very distant past, if what is needed is the courage to touch on the sore points, taking as our principals those of the Revolution — sincerity and honesty… Good. Let’s go!

I hope that very soon these long bland tirades will end and we will look with truly critical eyes, that is with our own eyes.

Translator’s note: Ana Laura Bode died of leukemia last week, in France where she lived in exile with her husband and three small children.