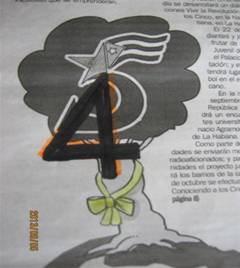 The ex-spy René, recycled as a hero by decree, in a sentimental address to the people of Cuba, in prime time on National Television made a call — authorized by his superiors, because here no one can make a call on their own — for people to wear yellow ribbons and to tie ribbons of the same color around trees, houses, cars, pets, etc. this coming 12th, as a demand for the release of his four brother ex-spies and also heroes, who are serving sentences in the United States.

The following day, delving into the topic in the Roundtable program, perhaps alerted that here, unlike there, there aren’t a lot of ribbons of any color, and those available can only be bought in CUCs (convertible pesos, i.e. hard currency), declared that it can be any object of this color: a button, T-shirt, skirt, scarf, and so on. In support of his proposal, he explained that it was a tradition of the American people to do this for their loved ones, far away for whatever reason, while awaiting their return.

It strikes me that here, where national traditions have not been and are not much respected, this gentleman intends to introduce a tradition, and one that is nothing less than that of our eternal enemy.

It might have been interesting had this tradition — with song and all — been introduced when thousands of Cubans were fighting foreign wars in Latin American and Africa, while their worried relatives awaited their return home. Then, it would have been greeted with great spontaneous acceptance.

Now, with regards to the four spies, it really touches very few, although I can say without fear of being mistaken that this yellow day will dawn in Cuba, because the herd syndrome — used on multiple occasions — will work. The Party, the authorities and all the governmental organizations and institutions are already concerned with bringing about this new ideological task.

To do this, the directors and managers of companies will demand that their workers wear the ribbons, and the most diligent are already doing so, getting the fabric, cutting it into strips, and handing them out to everyone, in order not to fail. In the schools, the principals are demanding it of the teachers and they, in turn, of the students, indicating, perhaps, that without them no one will be admitted to class.

Although this national entertainment, organized to divert people’s attention from their real problems, will not have any effect on the American people, concerned about more serious and far-reaching issues, the saga of the five-less-one will serve the so-called groups of solidarity, organized and subsidized by the Cuban government around the world, and the occasional political clueless, to demonstrate against the empire.

It is simply more of the same!