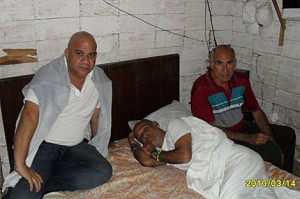 On Tuesday, June 15th, I ran into Juan Juan Almeida in the International Legal Office on 21 24, El Vedado. As we said goodbye, he told me he was starting a hunger strike on that day demanding the exit permit to continue his medical treatment outside Cuba. I visited him twice at his apartment on 41 and Conill before August 23rd, when he suspended his fast at the request of the Archbishop of Havana, who interceded on his behalf before General Castro’s government.

On Monday, August 23rd, Juan Juan seemed like the shadow of his shadow. In 69 days he went from 230 to 150 pounds. If it were not for his lucidity and good humor, I would have thought I was in the presence of a zombie. We talked for 20 minutes and I left before the arrival of his sister Glenda, who lives three blocks away and was keeping an eye on his hardships.

As I walked along Tulipán looking for the bus that would take me home, I thought again about this striker: extraordinary, cheerful, making jokes, the enemy of any type of inflexibility, able to listen even to the delirious fantasies of the State Security agents who have been breathing down his neck since he lost the protection of his father, a comandante of the revolution with an artistic vocation and a passion for power.

During his hunger strike, Juan Juan made statements to the foreign press accredited in Cuba, spoke with several bloggers and independent journalists, went out with signs to public places two or three times, received friends and people who oppose the regime, was the subject of controversy and attacks and political asylum proposals from governments in Europe and America.

For a great part of the world it is difficult to understand that a man would begin a hunger strike because he is not allowed to leave his country to continue the treatment he was receiving in Europe. It has a certain logic, since adults decide what to do with their lives, except in the case of Cuba and North Korea, where the State attributes to itself the authority to decide who enters or leaves the country.

For a segment of Cubans in exile, Juan Juan Almeida is loathsome due to his paternal origin. He has Castroism’s stamp of origin; he was educated as an officer of the Minister of Internal Security in the former Soviet Union and practiced his profession until he fell into disgrace. Perhaps he´s not forgiven for the publication of a book in which he satirizes his own life and the errors and horrors of the demigods who took hold of power and devour their own children. 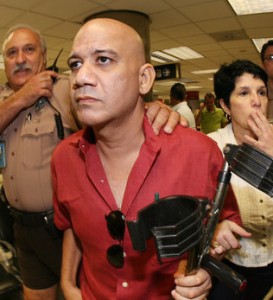 I don´t think he worries much about the conflicting opinions of those who judge him through a political lens. Juan did not distance himself from the power circle in order to climb in the opposition. As I listened to him on Monday, August 23rd, I thought that this charismatic and cheerful down-to-earth Cuban believes more in the smile and the handshake of those who greet him than in all the slogans and hallelujahs he heard since he was born.

P.S. Congratulations, Juan Juan! We are all happy for your liberation