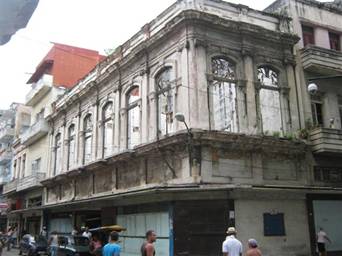 It’s 495 years since the founding of Havana. Celebration after celebration is being held, however, the serious problem of lack of housing grows every day, without any real chances of a solution. The causes of it are many and the results extremely well-known.

According to official data there are 33,889 nuclear families in Havana who need housing, a total of 132,699 people. To these they should add that many of those families have spent 10, 15, 20 and more years living in shelters with and without minimal conditions, where children and even grandchildren have been born.

Lately there’s been a plan to resolve the situation with the construction of urban settlements in different parts of the city, consisting of groups of affordable apartment buildings.

As the figures, are sometimes confusing, it is necessary to apply mathematics to understand them: 33,889 nuclear families between 1,500 annual apartments means it will take at least 22 years to resolve the problem.

If to this we add that, according to official data, every day in the city three buildings collapse, for a total of 1,095 annually, so in reality it would leave 405 of the estimated 1,500 buildings, because the other 1,095 would simply compensate for those that disappeared.

With this new data, it would then take 83 years. So this alone is not the solution.

So if you add to these affordable apartments come with a cement floor and the kitchen and bath aren’t completely tiled, leaving in the hands of the tenants, according to their personal means and interests, to improve the level of finishing, adding to that the construction defects that they present (cracks in the floors, damp walls, leaks, etc), the problem increases.

While domestic and foreign private investment in real estate is not authorized, and citizens, because of their low salaries and the high cost of building materials, lack the opportunities of building their own homes, it will be more of the same, and next year Havana will celebrate the anniversary of its founding in worse conditions than today.