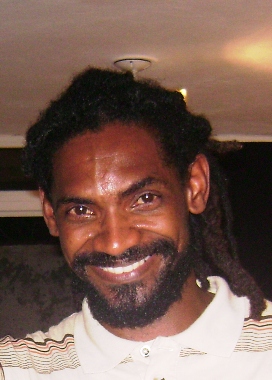 I had the opportunity to personally meet Raudel from Eskuadrón Patriota (Patriot Squadron) at that historic concert with Los Aldeanos and other important artists of the hip hop scene in the Acapulco theater. Raudel’s strength comes from his gentleness, his texts are uppercuts to public consciousness. He transmits that extraordinary energy to me when he gives me a big smile and asked blessings for this disbelief.

We hadn’t seen each other for a long time when we met Saturday at Estado de Sats, where he offered a mini preview of the CD he just recorded. One of his texts triggered an emotion in me so strong that just remembering it has me writing through tears.

It is very difficult to remain unmoved after hearing this viscerally honest man. Almost everyone there knew him, at least for his video Decadencia that has passed from hand to hand for almost three years now; I was not the only one excited that we could see it. It was beautiful to hear him tell it simply — while trying to fix the audio which he never managed to — what his journey was that brought him to be who he is today.

If we didn’t live in a country where many people are afraid, a text like Madre would have no reason for being. The concerns of a mother would be others. Mothers no matter where they are always have reasons to worry. But not for having a son who is a rapper. For having a black son. For having a rebellious son.

A message a la Raudel, today that the Pope will officiate under the guardianship of Martí: that no one will make us be enemies, that no one will push us to a fratricidal resentment. Blessings, brothers; Blessings.