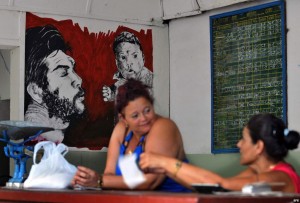 As part of a long list of inefficiencies and unfulfilled commitments, the state was not able to fulfill its commitment dated July 26th 2007 to guarantee a daily litre of fresh milk to every child under 7 years.

With a few days to go to the end of 2013, this year’s milk production is not known. That silence is a sign that things aren’t going well.

In most of the provinces, they are continuing with the standard sale of 3 kilos a  month of powdered milk, at the subsidised price of 10 cents a kilo. Every 10 days, children under 7 have the right to a kilo of this miik.

Not being able to guarantee the supply of fresh milk and in order to ensure the children get the diet they need, the state had no choice but to import thousands of tons of powdered milk whose price in the international market was over $4,000 dollars a ton.

That imported powdered milk is also for pregnant women and those diagnosed with chronic illness like diabetes, who get a voucher for a kilo of powdered milk a month, whose price is similar to that sold for children.

It seems like the milk production in the past year has not been what was hoped.

Last August 5th, the weekly Trabajadores, official publication of the Cuba Workers Centre (CTC) , announced the construction of a powdered milk factory in the province of Camagüey with capacity to produce 100,000 litres of milk a day, using milk from the dairies in the Camagüey area.

Production testing of the factory in question will be started at the end of September.

They are putting up the new factory in the place where the old factory was to have been in the 90’s, which would have been the first powdered milk factory in Cuba. Construction was held up for lack of funding. Since then, the state has kept on importing powdered milk, thousands of tons, paying tens of millions of dollars.

The powdered milk factory which they are putting up in Camagüey is fitted with Chinese and Italian technology and its cost has reached 528,000 dollars. It should produced 2,350 tons of powdered whole and low-fat milk a year and 1,100 tons of butter.

The newspaper Granma, on 31st August, announced that work on the project was over 70% advanced  and that at the end of September they will start assembly of the machinery and, if there are no holdups, they forecast completion for the end of December. But, up to now, they haven’t given any more information on this.

At the beginning of December, they announced that pregnant women and the chronically sick in the provinces of Mayabeque, La Habana, Artemisa and Santa Clara, who received powdered milk for their diet, by way of an experiment, will, from January, instead of that, receive a new dairy formula made up of casein, lacto-whey, water, and animal or vegetable fat with different levels of protein.

On this point, the Vice Minister of Internal Trade, Bárbara Acosta, said that this measure was taken because of the over-consumption of powdered milk and assured the deputies that it would not be extended past the date indicated

It seems like there was a setback in the production of milk in the second half of this year.

In the Foreign Currency Recovery Stores* (TRD, from its Spanish initials) they have not offered butter or condensed and evaporated milk produced locally for months.

You only find cheese in certain supermarkets, and not always. The price is about $15 a kilo, which is in fact prohibitive for most Cubans, whose salary doesn’t exceed $20 a month.

The official press keeps completely silent about the crisis in the production of fresh milk. It seems like the government has ordered that they don’t touch on such a sensitive topic.

*Translators note: This interesting name makes clear the government’s interest in operating stores that sell products only in hard currency; their purpose is to “recover” the remittances sent to Cubans from family and friends abroad. Products in these stores are generally sold at significant markups.