14ymedio, Reinaldo Escobar, 9 October 2016 — “The whole country is a broken record” says Canek Sanchez Guevara, grandson of Ernesto ‘Che’ Guevara, on one of the pages of his book 33 Revolutions published posthumously in France this year and recently published under the imprint of Alfaguara. The volume takes a hard look at the Cuban Revolution and the everyday life of the island, where the writer immersed himself after spending his early childhood in Italy, Spain and Mexico.

At the age of 12, Ernesto Guevara’s grandson, son of his eldest daughter Hilda, arrived in his native country and came face to face with a very different reality from what he had imagined in the cradle of an iconic leftist family.” Every day is a repetition of the previous one, every week, month, year; and in the endless repetition the sound is degraded until all that is left is a vague and irreconcilable remembrance of the original audio,” he wrote.

Canek couldn’t imagine, on arriving on the island, that he was coming to a reality on the verge of abrupt change. In the far off Soviet Union, Mikhail Gorbachev was consolidating Perestroika, while Fidel Castro was arguing for the defensive move of a “rectification of errors and negative tendencies” in which agricultural markets were demonized, and calling to not “build socialism with capitalist measures.”

The guerrilla’s grandson found a country in which “nothing works but it doesn’t matter,” as he described in the pages in 33 Revolutions. This clash between the propaganda and the life on the streets fills the book that he worked on for more than a decade and that only saw the light of day after his premature death, at age 40 due to complications from heart surgery.

A friend of designers, admirer of some songwriters who didn’t even appear in state venues, and immersed deeply in Havana’s nightlife, Canek was a rare specimen of a “daddy’s boy.” If in the clans of the comandantes, the generals and the high officials, everyone focused on getting the greatest perks, the scion of Che’s daughter preferred the shadows, making every effort to pass unnoticed.

He was born in Havana in 1974 and was the fruit of the union of Hilda Guevara Gadea and the Mexican Alberto Sánchez Hernández, a young man from Monterrey who was active in the Armed Communists League and who came to the island after hijacking a plane. Many friends would later joke with Canek about the fact of rebellion being written in his genes… but Cuba was no longer territory for rebels. 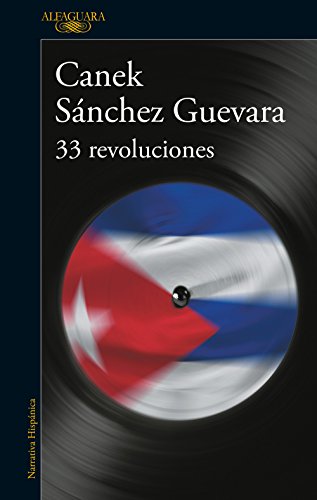 Instead of joining the official choir, the grandson of Che honored his name, which in the Mayan language means “Black Snake,” and slipped silently and without deceit through a Cuba where every door opened at the mere mention of his grandfather’s name. To the powerful, of course, they didn’t like this young man’s fascination with “the underworld,” and with ordinary people without military rank nor biographical feats.

The stories told in 33 Revolutions distill much of what the author confessed in an earlier autobiographical text, dated 2006: “Living in Cuba: I loved and hated as only you can love and hate something valuable, something that is a fundamental part of you.” He would live through the most difficult years of the Special Period on the island, witness the 1994 Rafter Crisis and in 1996 decided to move to Oaxaca, Mexico, where he performed most of his work as a writer, designer and cultural promoter.

Years later, he explained that his departure from Cuba was largely due to “the criminalization of difference,” which took place in his native country, especially the “persecution of homosexuals, hippies, freethinkers, trade unionists and poets,” and the enthronement of the “socialist bourgeoisie (…) fake proletariats,” to which he did not want to belong nor contribute.

This October, the news of the appearance of his book from a Spanish publisher promises to tarnish the hypocrites of the official tributes, who honor his grandfather in Cuba on the occasion of his death on October 9, 1967. The headlines of the official press repeat over and over, ameliorated by the news of hurricane Matthew, the old formulas of “heroic guerrilla” and champion of freedom, which they awarded Guevara de la Serna, “el Che.”

However, it’s enough to walk the streets of Old Havana to see Canek’s Grandpa turned into a tourist fetish, his face stamped on every shirt, ashtray or fake piece of primitive art — memories and dreams for sale. In each bar filled with Americans is heard the chorus, “here it is clear, the treasured transparency of your beloved presence Comandante Che Guevara, remains,” which brings applause and tips, many tips.

Site manager’s note: 33 Revolutions is available in English for pre-order; it will be released in 2 days on 11 October 2016.