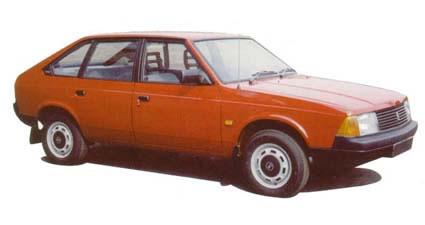 The law regarding vehicle sales finally came out. In its wait, my friend Zoely for more than two years has been taking tranquilizers and making offerings to Elegguá [one of the deities in Afrocuban mythology]. It happens that Zoely, a prosperous manager of a store that sells in foreign currency, bought an Aleko car from a friend who had bought it from a cousin who had bought it from the son-in-law of the original owner. Zoely took care of it and pampered it: body work, a change from a gasoline motor to a diesel motor, seat upholstering, “funny” tires, halogen lights, air conditioning, metallic burgundy paint. The veteran Aleko is “smoking”, but the owner continued to be – although only nominally – for all legal effects the same owner who bought it new in the late eighties.

When Zoely acquired that car, a “tareco” [old thing] more than an Aleko, she went to visit the owner, whom she didn’t know, as if it were a mission for the Three Wise Men. Instead of incense and myrrh, she took detergent, soap, oil, tomato sauce and a succulent platter with red sparkles of beef. Farsighted, during that visit she agreed to draw up a proxy to act in matters regarding the automobile and made the owner swear, on his mother, his honor, and all the saints, that he was not thinking of leaving the country.

With the publication in the Official Gazette of the “Car Law”, Zoely uncorked a bottle of Freixenet sparkling wine, assured that she would sleep soundly that night without pills. When she told me the good news, it seemed unfair to make her come down from her cloud, but it was my duty to alert her, in case that in the process of transferring the car a commotion would be stirred in which she would lose her Aleko and, even worse, her job, because, Zoely, how are you going to justify the money that car has cost you? She looked at me without blinking and poured herself some more of the sparkling wine (cordon bleu, delicious). Last night she came over to my home and reproached me saying that it’s my fault that she continues not sleeping well.