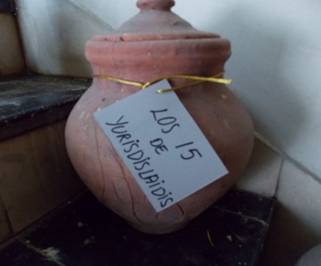 After a disastrous first marriage which bore no “fruits,” Isabel — a slim, young brunette — met a young laborer with whom she fell hopelessly in love. They decided to become a couple almost on the first date. From this “explosive union” a child was born, whom they named Yurisdislaidis because compound names and those with the letter Y were very fashionable at that time.

All her life Isabel had dreamed of having a daughter whom she could “dress up” and shower with affection. After giving birth, she firmly resolved to stash away part of the money she earned as an at-home manicurist in a clay jar that had belonged to her grandmother. She left it in the care of her mother, who did not trust banks. Every week Isabel fattened the jar, depositing part of her earnings in it.

Meanwhile, her selfless husband was using the old Oldsmobile he had inherited from his father as a taxi. He was taking his chances, doing it “on the side,” since he was never able to obtain a license. By redoubling his efforts, he drove more routes than his malnourished body could stand, all in the hopes of bringing home some extra money so that his wife would not have to work so hard or “touch her little savings account.”

They made these sacrifices and many others perhaps not worth mentioning, including foregoing the eighty grams of daily bread allotted to each member of a nuclear family in the ration book, which they gave to the little girl. She got one for breakfast, another for her school snack — filled or topped with whatever they could get their hands on at any given moment — and another to accompany a café con leche which she had before going to bed. This is how Yurisdislaidis grew up, eventually becoming a lovely young lady.

There was still a year to go before the her fifteenth birthday, and the family had already put together a trousseau for the much anticipated celebration. They still had to find a suitable pair of shoes for the occasion, a make-up artist and a photographer.

It was then that Demesio, the father of Yuris — curiously, this is what he called the child, perhaps because it was too much effort even for them to call her by her full name — began working as a mechanic, fixing his neighbors’ broken cars. It was a skill he had learned the hard way over many years by fixing his own car after driving it through Havana’s pothole-filled streets and avenues. All this caused his health to deteriorate, making him look older than he really was.

Isabel’s eyes fill with tears as she describes the unforgettable day in which her beloved husband arrived home exhausted but joyful, “with a smile from ear to ear” and his face glowing with emotion. He was carrying a package in his arms which he laid at her feet as though it were an offering to a goddess. It was a brand-new pair of white shoes with high heels and two shiny buckles as the only ornamentation. A regular client, who was aware of his troubles, had provided them as a gift for his daughter. Now she only needed to find a modern photographer with good taste since she was already getting the make-up artist — a charming gay man, who was the brother of one of her clients — for free. Everything “was set!”

Finally, the long-awaited day arrived. The local Committee for the Defense of the Revolution and the neighbors on the block were all excited, watching the comings and goings of strangers entering and leaving Isabel’s house. It was a big event. From the early morning hours music blared at full volume, alternating with the voices those present, screaming to be heard. These were the friends who had come to clean and decorate the house. In the main room there was still the portrait of the former lady of the house, as always with flowers, who had the foresight to will the place to Isabel, her former employee, legally leaving it to her as an act of gratitude for having been her companion and caregiver after her entire family had decided to leave the country. She had stayed behind because she wanted to die in Cuba.

The first to arrive that day was Francisco, the make-up artist, followed by the lady who was providing the various outfits for the photo shoot. When the birthday girl was finally ready, the young photographer arrived. A stunning 1950s convertible belonging to one of her father’s friends was parked in front of the house, waiting to drive Yurisdislaidis to the Plaza de San Francisco in front of the Chamber of Commerce building. She was dressed in a distinctive costume like those from the Cuban soap opera, Las Huérfanas de la Obra Pía — with parasol and all the other 19th century accessories — to have her picture taken among the pigeons and recently restored historical buildings. Behind Yuris was an entire entourage, darting to the various locations chosen by the photographer. They were the make-up guy, the costume lady, the camera man with his tripod slung over his shoulder and her mother carrying baskets filled with artificial flowers, shoes on loan, wigs of one sort or another, and head ornaments for her beloved daughter.

After returning home, a few “more artistic” photos were taken. These showed her peeking from behind a shower curtain, exposing a bare thigh, pretending to fall down head first with her legs strategically placed above her, coming down the stairway, carrying a hat and suitcase as though she were on a trip, and so forth. These were to fill an album which she would later proudly show to relatives, friends and teachers at her school.

From what I was able to find out later from some neighbors, the party was “over the top.” Beer and rum flowed freely. There were fish croquettes, pastry hors d’oeuvres, cold macaroni salad and guayaba tartlettes, all provided by some friends. Afterwards, they served a big pink cake decorated with flowers and fifteen candles — the kind that  do not go out when you blow them — procured by someone who “had come from far away.” The extravaganza ended at dawn, when there was nothing left to eat or drink. To this day people in the neighborhood still talk about it.

Only a couple of years later I happened to run into Isabel, noticing how much older and thinner she looked that usual. When I asked about Yuris, she made an attempt to smile. “She’s fine,” said Isabel, “but she wants to quit school because she says she does not feel motivated. So I am still struggling, trying to fill up the clay jar again. My daughter has now gotten it into her head that she has to be made a saint!”*

*Translator’s note: Kari Ocha, or “to be made a saint,” is an initiation ritual of Santería, an Afro-Cuban religion, and can cost as much as $800 if you are Cuban, and significantly more if you are from overseas.