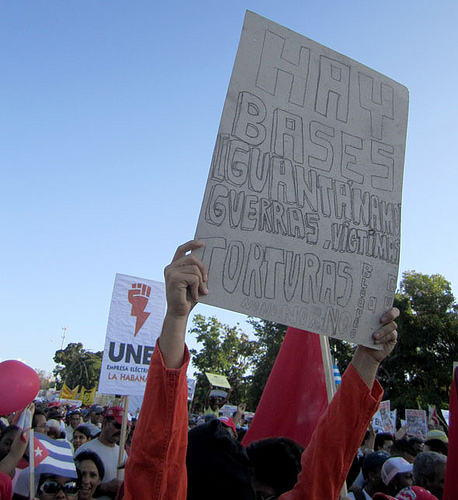 A young man is stopped and subjected to a check after his performance at the end of the parade on May Day in the Plaza of the Revolution, Havana, Cuba.

The boy looked very embarrassed, almost hysterical and crying as he overreacted to the civil authorities (State Security) who separated him from people and berated him against the railing in front of the monolith.

He was dressed in the orange overall of the terrorist prisoners at the American Naval Base in Guantanamo, Cuba. He carried a placard with anti-imperialist slogans. He was barefoot and masked. One of his captors is the famous Pavón who blocks the entrances of Cuban movie theaters to bloggers.

Hopefully this young man could be quickly identified and will have no problem with the Cuban authorities for his ingenious demonstration.