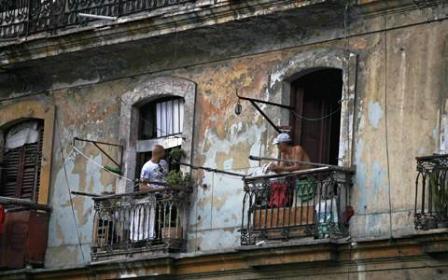 Roberto Lopez arrived early at the Arrroyo Naranjo Property Registry. His plan was to divide his house. One part of the house was to be donated to his only granddaughter and the other was to be sold. He is 70 years old and he needs resources to live. He was number 10 in line that morning, but when it was his turn, they told him that he could not register his house.

As of the enactment of the new norms decreed by the Council of State, which modifies the law regarding housing, Cuban property owners are running en masse to the Notary of Property Registration in order to comply with the new laws required to place their titles in compliance with the new legal standards.

The now traditional lines in front of these institutions start in the early morning, and by the end of the day there are always people who have not been seen. Not all has been resolved. Time ran out to get things done, but the government does not provide an adequate infrastructure or sufficient personnel to deal with the demand required by the new laws.

It doesn’t matter, Cubans are used to it. With incredible patience, they wait for their turn to be attended to. There is, however, no shortage of people who lack the right paperwork. After waiting four hours in line, it is not easy to deal with not achieving your goal simply because of omissions or errors that are not your fault but which are the fault of the office that granted the title to the property in the first place.

“You need to update your title in order to sign up your house on the Property Register,” the specialist tells Roberto. The procedure is required for those who want to sell, trade or donate their houses. “What does that mean?” asked the old man disconcertedly.

“The measurements, boundaries and also the area are missing in the description of your house,” responded the lawyer who was looking over his documents. An omission that most of the property titles written before 2003 suffer.

“First you should go to the office of the community architect and request his services to carry out a technical opinion and an appraisal, then, with the architectural document, you need go to the notary so they can rectify the omissions, and last return here to request the registration of your property,” added the specialist.

It sounds easy enough, but the process would require getting up early and losing a day of work to stand in line at the architect’s, another day at the Notary’s, and yet another day at the Property Registry. That’s without counting the time that each step would take. “It looks like my plans will take at least three more months,” commented Mr. López without much enthusiasm.

The buyer for Roberto’s house is not disposed to wait. He plans to pay to speed up the process. Haste is valid in all parts of the world, but it signifies corruption for the Cuban government, one of the aggravating battles of life on the inside.

That’s how the island’s recently approved regulation has begun to be applied. It permits the buying and selling of houses and eliminates one source of illegalities. It also increases the workload of the state functionaries without increasing their salaries. No doubt the corruption and prevarication of those workers remains as a work in progress.

Translated by: Hank and Scott