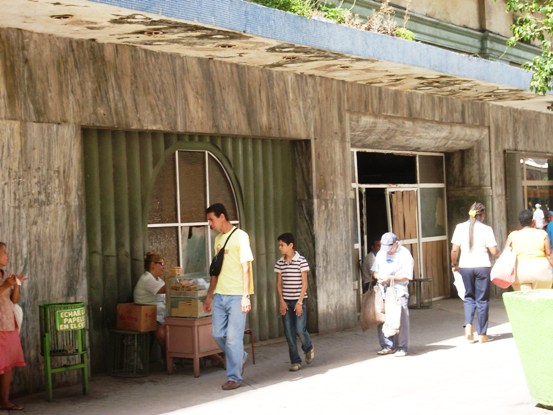 I delighted in entering the spacious indirectly-lit lobby, I loved those seats that reclined. I begged my mom to leave me in the Rex watching the cartoons and shorts while she walked through the shops. In the Duplex I saw Waltz for a Million something like four times, a Czech film, Spartacus, with a catchy musical theme that came after many battles and many tears to refresh the film industry of the sixties.

But time and the eagle of the sea passes, and the first Cuban multiplex was closed to renovations, the renovations never happened, the place lost the box office, the carpets, chairs, ceiling and was turned into the dump of the old Bristol Hotel, reinvented as multi-family housing. The plumbing system of the old hotel, also old and lacking maintenance, couldn’t stand up to the onslaught of residents, and they chose to dispose of their excrescences out the window… right into the space of the Rex and the Duplex.

In the first repairs tackled on the Boulevard, they thought to save the building, but except for the facade there was nothing left. They chose to block the entrance with glass and aluminum doors, and not even the glass survived.

By size, the strongest impression comes from Fin de Siglo, Flogar or Cuervo y Sobrinos, then the Praga jewelry store, dark and dirty premises that let you search among their repetitive merchandise sold in national currency for a past splendor. Walking along San Rafael, almost no one under forty might suppose, fleeing from the plague that identifies the place today, the existence of those agreeable little movie theater rooms.