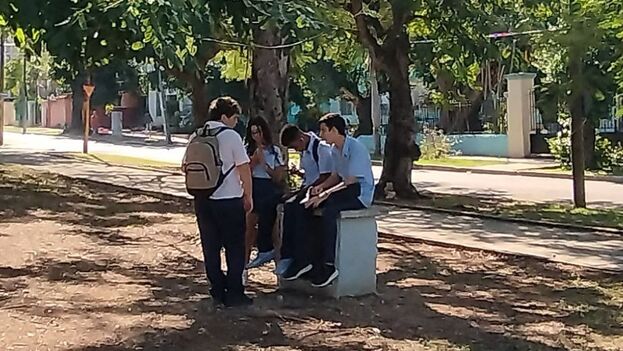 14ymedio, Juan Diego Rodríguez, Havana, November 28, 2022 — Not even in Cuba, immersed in a deep economic crisis, do children cease to be excited about the first day of school. Thus, this Monday, when the 2022-2023 cycle begins, enthusiasm and shouts were evident at the school doors, not only in Havana but in other provincial cities.

Parents, of course, know full well that the course not only begins off balance, once again, due to the various interruptions from the COVID-19 pandemic, but with worrying shortages. Hence their long faces, distant from the enthusiasm of the children.

We walk around like crazy people looking for polyester for linings and fasteners,” a Havana mother complained this Monday. “Not to mention the price of backpacks or shoes, or all the notebooks that will have to be bought, because they have already said that they’re not going to distribute what they did in other years.”

On the one hand, students would receive half of the notebooks that are usually given to them, Velázquez said, an “adjusted standard” that will also be applied to pencils: one per month, unlike the two that used to be offered.

Students will continue to use the dilapidated textbooks that have already passed through hundreds of hands. “We have indicated the need to recover the existing ones for redistribution,” the minister said, alluding to the custom of many students to “stay” with their books, often “solved” by paying the teachers for the privilege of a copy in good condition.

However, Velázquez assured that the books are also available in digital format for “students who have conditions for it,” a measure that, in her opinion, will be beneficial for “those who don’t have the necessary resources.” Although the school year is about to begin, the workbooks are barely “in production,” and the minister warns that there is little paper available in the print shop.

As for school uniforms, to the lack of which the population is already accustomed, there is a demand for 2,153,310 garments, according to Mirla Díaz Fonseca, President of the Light Industry business group. According to the official, the blackouts have prevented achieving the “work rhythm” necessary for the uniforms to be ready for the beginning of the school year.

Thus, only 1,274,000 garments can be delivered. The rest, if the materials are obtained, will have to wait until February. Díaz Fonseca explained that not even that amount would have been possible without “a donation from China” and the “new method” of re-dyeing the old mustard-colored uniforms blue.  The old uniforms were worn in basic secondary schools before the change of design, which was carried out in the midst of a serious commodity crisis, and the dying process is now carried out by the textile manufacturer of Villa Clara.

The deficit of uniforms will be felt in the establishments provided by the Ministry of Internal Trade to sell them. Although it is customary to bribe the salespeople of these shops or to resell garments, the fact that the uniforms will be available for sale in only 1,900 stores will make the purchase even more difficult.

Those who don’t manage to get the uniforms or don’t reuse the ones they already have will still have to “attend school with the appropriate clothes,” said the Minister of Education. Without explaining where and how parents will be able to buy those clothes for their children, or defining what she considers “appropriate,” Velázquez apologized by stating that the school year was “a challenge for everyone,” and that things would be different if not for the US blockade, which is “hardening.”

Food is another issue that will not improve, and Velázquez avoided talking about it, although it mainly affects boarding schools, semi-boarding schools, households without subsidiary protection and basic secondary schools that follow the school snack regimen.

What she did say was that “the confrontation with cultural colonization” is, now more than ever, a priority of the educational system and its “political-ideological work system.” Invoking as “paradigms” Fidel Castro and Che Guevara, Velázquez said that the Ministry of Education is targeting those “young people who do not study or work” and teachers and managers who support “unacceptable” behavior, because “from indiscipline come crime and corruption.”

This newspaper has collected numerous testimonies of students in primary, secondary* and pre-university* schools who have been prohibited from entering classrooms with T-shirts that include the name of brands, signs or eye-catching figures. In some schools, the wearing of black T-shirts is not allowed, because black is considered “an opposition color.”

Another problem that the official media don’t talk about is the gap between those who have hard currency to buy what is necessary and those who don’t. “And now the cellphone is a problem,” adds a father of Sancti Spíritus. “Imagine that since everyone has a cellphone, my daughter also wants one, and I don’t know if we’re going to be able to afford it.”

As for the foreseeable lack of teaching staff, caused by last year’s unstoppable migratory exodus, the authorities did not give figures, but in schools in Havana they found many “new faces” among teachers. “And not all the positions are covered,” says a teacher from the capital who prefers to remain anonymous.

*Translator’s note: In the United States these designations would be “junior high school” and “high school.”