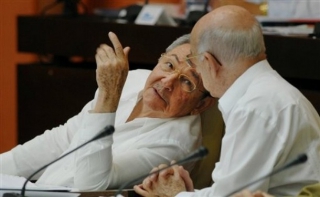 The last five years in Cuba have been fruitful in the theoretical development of solutions to the country’s severe problems, mainly those related to the ills of the economy and other endemic viruses, an endless list including bureaucracy and corruption. Generally, these social atrophies are usually addressed by analysts sympathetic to the government as if they were temporary or recent conditions, or as if they were due to an accident not caused by the internal politics of the country –- the so-called “Special Period”, which has become almost as helpful as the “blockade” — or as if they were deficiencies of such a subtle and invisible nature as to have gone unnoticed for decades, even by the seasoned eyes of our highly experienced government leaders.

Theorists attempting to rediscover a kind of socialism “a la Cuban” that would be viable “just now” are not exactly members of the nomenklatura, much more reluctant to change, but certain individuals and groups of reformers who may sincerely opt to improve Cuban reality after the introduction of “changes in the model.” In an exercise in good faith, I am inclined to believe that these are mostly well-intentioned proposals, but I trust that they and the scribes know that good intentions, though necessary, will never be enough to reverse the serious national disaster.

Among the most active theoretical reformists is Pedro Campos, host of a trend called Participatory and Democratic Socialism, who has been presenting some projects of socialist worker-managed cooperative enterprises, among other proposals. His ideas are what could be called a trend critical of that of the official line, which I consider important to point out, since his position with respect to the government does not exactly represent a conflict between different schools of thought, but different positions to sustain the same thought, which can be summarized essentially in two words: revolution and socialism. However, I think it appropriate to acknowledge that within the “revolutionary dissent” Campos finally begins to recognize, at least de jure, the legitimacy of the rights of those substantially different, that is, of the non-revolutionary and non-Marxist dissidents.

“Democracy, to control the bureaucracy”, a Pedro Campos Offering, published on July 6th in the digital site Kaos en la Red, is a piece too long to review it in its entirety. However, because it contains opinions arising from an ideological position that I do not agree with, I should dwell on some specific considerations that could lead to a debate between adversaries who respect and recognize each other’s rights to their opinion and dissent, but unfortunately I never had the opportunity of a face-to-face discussion with the author on our respective points of view. This could be a form of inquiry that allows me an approach to the thinking and transformation strategies with which those who are “not my equals” imagine their projects in a future Cuba, and a glimpse of how such a project can encourage a possible exchange that will eventually contribute a small measure to strengthen the essential civic foundations of that future.

In principle, I find suspect any writings that begin with a Martí header, especially as in the case of trying to defend socialism against bureaucracy, using for effect a phrase from a speech in which the Apostle [Martí] vigorously denied it for that very reason, defining socialism as a system in which man would go from “being a slave of the capitalists, (…) to becoming the slave of servants”. Such trickery, in addition to misrepresenting Martí’s ideas, would eventually become silly due to so much overuse. On the other hand, too frequent references to “what Fidel said,” or “what Raúl says,” as ultimate sources of legitimacy, are a widespread habit among those who analyze the Cuban reality from the perspective of “revolutionary”, and suggests a poorly disguised intent to evade the consequences that critics of any denomination tend to suffer. This practice also tends to diminish the potential value of the arguments. A proposal should not be validated according to its connection to the speech of a leader. However, it is fair to say that the article referenced in Pedro Campos is gaining in audacity as he gets into the analysis, all the way to his making truly bold statements within the Cuban context.

According to Campos, “Since coming to the Presidency, the current first secretary of the CCP tries to pull the country out of stagnation and has rightly spoken of eliminating secretive and absurd regulations, of involving workers, creating venues for differences and contradictions, of decentralization, national unity, of creating a critical press, and he never tires of saying that we must change the mindset, methods, styles and structures”. Such a statement would be relatively true if it were possible, in practice, to verify the performance of such intentions. However, since F. Castro’s famous Proclamation on July 31, 2006, which allowed him to continue to “govern” the country symbolically in effigy for another two years before actual power was transferred to the General-President, five whole years have transpired without substantial changes being apparent as far as the “inertia”, the “secrecy”, and the long list of “absurd regulations” which Campos criticizes.

On the other hand, Campos indicates other issues of particular importance when attacking not only the persistence of cumbersome bans and the sluggishness in implementing processes that should promote so-called “non-state forms of ownership” — a euphemism that avoids the heretical phrase ” private property” — but also that it is unjustifiable not to abolish regulations and legal obstacles that impede the progress of the changes proposed during the Sixth Congress of the PCC, primarily with regard to housing, food and transportation. “The urgency of the crisis that Raúl has referred to would require immediate and ongoing meetings of the Cuban parliament, the legal procedure for changing everything that must be changed, but no one thinks of that”, complains Campos. And this is so true, I would add, that not even the General of the Reforms himself thinks of it.

The double standard of the “state-centered economy” is severely chastised by Campos in some statements, when he challenges the validity of the application of market laws in hard currency only for the State, while the vulnerable national currency economy continues to suffocate; the accelerated suppression of free services, the elimination of subsidies and budget cuts in contrast to the persistence of low wages, the one and official media –- which, he declares, “remains fully controlled by the ideological apparatus” — reflecting the problems of the state economy, but keeping the old proposals in the old schemes that exclude the participation of the workers; the advances in the decentralization process is not realized, but the market monopoly continues, the recourses, business and policy decisions, and he notes that “the military sector accounts for the most productive firms in hard currency, the internal hard currency market and the main projects shared with foreign currency”. He even mentions that other dependency that stifles us today: Venezuelan oil.

His questions are not confined to economic circles, but extend to the minefields of politics and he even claims some murky and sensitive spots, such as the internal repression and the topic of relations with the U.S. Here he states that “State Security should not interfere in ideological or political issues”, and he adds “dissidents are continually being harassed in different ways (…) and also harassed are whomever, for whatever reason, differ from government policies or disagree with officials whom the Council of State determined should be at the helm of the country’s direction”.

In his list of ailments he includes the harassment of blacks and mestizos through the principle of “pestering tourists,” stating that “… the hounds of neo-Stalinism can charge as counterrevolutionaries or agents of the imperialism any citizen exchanging ideas with an American diplomat or with a political dissident, respectively. And whoever dares to receive a penny of assistance from any international entity suspected of having any link with the U.S. government can be accused as a ‘traitor and agent of the CIA’ and can be sentenced to several years in prison”. He also refers to targeted TV attacks and “independent bloggers, religious laity who criticize undemocratic aspects of the political system or anyone visiting the U.S. embassy”, qualifying such programs as a “true factory of adversaries”.

Existing emigration regulations are another target at which Campos throws his darts, noting that “they seem more like a lucrative business for the bureaucracy and a kind of punishment or penalty for Cubans wishing to travel for personal reasons than mechanisms that make people’s lives easier.”

Perhaps most remarkable is not that Pedro Campo’s criticisms coincide with the allegations that individuals and opposition and independent journalist sectors have been making for years, having paid a high price for doing so. Campos additionally offers an unexpected revelation from a socialist: “the problem in depth is systemic”, and further: “it has been recognized that the old model does not function, but instead of changing all that should be changed, the government/party tries to ‘update’ it, which equates to maintaining intact its support bases: the bureaucratic state, state concentration of property and decisions, wage labor, and other schemes of neo-Stalinism for the control of individual freedoms and democracy”. Without doubt, a commendable audacity.

Nevertheless, Campos cannot avoid succumbing to the trite contradiction of condemning the model system and the party/government in the same package, and trying to dilute the power cupola’s responsibility in a collective guilt, as if the makers of the country and the rest of us Cubans were at the same level. Indeed, the balance for the debacle of a nation cannot rest solely on a small group of individuals. Today, only a handful of ailing elderly still control the destiny of 11 million souls, but if the responsibility were shared, we would have to share equally in the participation of reforms and decisions, this time giving advantages to those of us who have been held back for more than half a century when they were being made. Because what Campos should not forget is that 70% of the Cuban population was born after 1959, bereft of democracy, and not directly involved in the construction of this Frankenstein monster.

For Campos, the Castro brothers are the “most responsible”, but he stirs them in with other criminals, creating a brew into which “all Cubans with some political culture” fall equally (only a tiny fraction of the Cuban people could actually be listed in that category), “those who chose to leave the country rather than getting in trouble”, “those who chose wrong violent methods to address democratic deficits” (he mercifully omits that the historical leaders of the revolution came to power and seized the nation using these methods from July 1953 to date). And, in a whimsical parable, Campos has most of the blame landing on… “American Imperialism that established and maintains the blockade…” And thus, like in B movies, in which the villain we took for dead grabs the heroine’s ankle as she is trying to make her escape, the Imperialist claw appears once more to establish itself as evil incarnate. Without denying the stupidity of the policies of successive U.S. administrations, countless times I’ve wondered what would become of the Castro revolution without this inexhaustible resource, Yankee Imperialism.

To sum it up, Campos’s article, despite its values, maintains the spirit of a catharsis in which the author seems to try to rid the demons of their own fears. This is a good thing, because, after all, it is always a first step requiring a great deal of courage. I suggest that this assumption of his inclusive mood is another positive step which a colleague and friend coined as the indispensable “decriminalization of discrepancies.” As for me, I thank Pedro Campos for his kindness in publicly acknowledging the right of those who think differently than he does, and I also I offer him my respect and consideration together with my full willingness to keep the debate going.