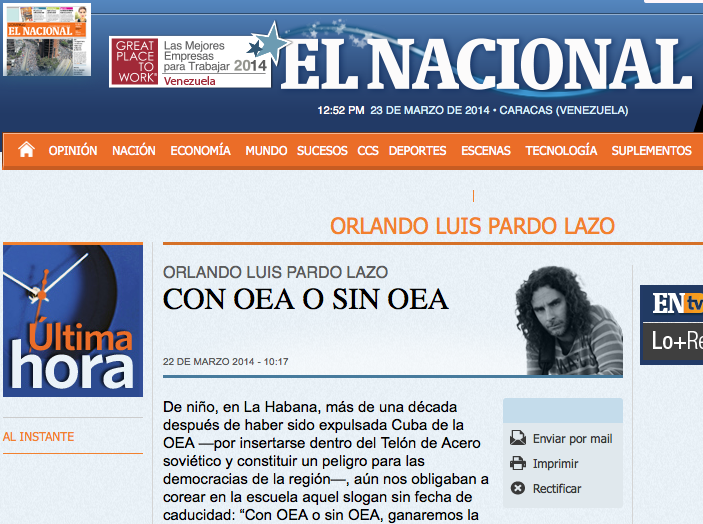 As a child in Havana, more than a decade after Cuba had been expelled from the Organization of American States (OAS)—for placing itself within the Soviet Iron Curtain and constituting a danger to the region’s democracies—we were still forced to chant at school that slogan with no expiration date: “With or without OAS, we will win the fight.”

As kids we had no idea what “OAS” might mean. We imagined it as the imperialist bald eagle that frightened us in so many children’s songs of that era.

But our childish innocence wasn’t important, as long as we never flagged in our discipline as “Moncada pioneers”: that is, children capable of assaulting the Moncada barracks and dying fighting at dawn, disguised in the uniforms of those soldiers who were taken by surprise in Carnival season, as Fidel Castro did in the putsch of Sunday, 26 July 1953.

All that mattered then was to show and demonstrate our patriotic devotion in the classroom, shouting this slogan until the veins in our necks ached. We had no idea what “living in chains is to live in dishonor and ignominy” meant, but we just sang that line in our National Anthem with grim theatricality at every morning assembly.

It seems that the slogan of the Cuban Communists remains strongly in force. The government in Havana boasts it will never return to the OAS, and promotes parallel organizations—like the Community of Latin American and Caribbean States—to diminish the prestige and power of the OAS. And to top it off, Cuba controls, through a headless Venezuela, the geopolitical interests and economic dependence of the region, given that many Latin American ambassadors appearing in front of the OAS are nothing more than puppets, supporting or boycotting as a block in response to neocastroism’s strategic interests, be they “Twenty-first Century Socialism,” or “State Capitalism” or “Raulpolitik.”

Yesterday, Friday March 21, I spent the day at the OAS in Washington DC. An odious odyssey of fears and lies was taking place within, in the opaque style of dictatorships, under the pretext that every people have exercised their right to decide through majority vote. But, in reality, we’re not talking about 100% sovereign nations. In the best of cases they are the pawns and parasites of the authoritarian chess game controlled from behind the Havana Curtain. In the worst of cases, they are despotic-populist regimes where the caudillo and his clan are legally “reelected” to the end of time, with no options for the opposition, and with an infiltration of intelligence forces comparable only to the criminal Plan Condor from decades back.

Yesterday, María Corina Machado was treated by a miserable majority at the OAS as a fugitive from supposed Venezuelan justice. Her companions—the student leader Carlos Vargas, the union leader Iván Freitas, and Rosa Orozco who became an activist after the assassination of her daughter Geraldine Moreno—were rudely censored and almost ejected in handcuffs from the building by OAS Security (not to be confused with State Security, much less with the murky Cuban G-2, which coerces without batting an eye—by force of blackmail and terror—Eurodiplomats, global magnates and Yankee congressmen and women: remember that Castro spies have been captured inside the Pentagon).

The message could not be more repugnant, with or without the OAS: the leaders of the area are delivering María Corina Machado into the jaws of some desperate usurpers between Havana and Caracas, who no longer care about formal procedures because they know their time is up and that only slaughter will keep them in their positions in perpetuity, if they finally manage to impose in Venezuela and the rest of nations that call themselves “Bolivarian”—that word which, like “revolution,” means nothing and is the cause of all the impunity—the civil cemetery in which we Cubans have lived since the first year of “our” Revolution.

María Corina Machado has humbly declared that there are millions of citizen leaders in Venezuela today. True, but this formula is completely useless to the rage of the repressors, who need to stigmatize, isolate, disable, imprison, exile, and even execute, as if by accident, a specific number of leaders.  A sacrificial relationship with good Venezuelans whom she and Leopoldo López now definitely represent. A limited list that is a limitless list of hope for finally eradicating—after more than half a century of myths and bullying—continental Castroism.

Yesterday, the OAS voted for much more than the silence of María Corina Machado. Yesterday the OAS sentenced her to the murderous loneliness of nasty socialism, which is the only one that germinates in America. Yesterday the OAS made itself an accomplice to a crime against morality which, like the coercive quotas of Venezuelan oil, muddies the miserable hands and tarnishes the reactionary faces of half a continent.