The punishment cell is narrow, is five feet wide by two long, cold and there is not even a blanket for cover. From the hole in the floor that serves as a toilet, a rat occasionally emerges and looks curiously at the curled up man lying there. Outside shouts are heard, metal banging, and the general noise of the Aguadores prison, one of the most feared in eastern Cuba. This scene, common in our prison system, was repeated in early January and was had as its protagonist a young man of 31.

He was called Wilman Villar Mendoza was arrested on November 14, 2011 while participating in an antigovernment protest in the streets of Contramaestre, his hometown. In images broadcast after his death, he is seen at the head of a group carrying the Cuban flag, while the astonished passers-by do not know whether to join the crowd or to shout down the demonstrators. Probably the memories of that place passed through his head again and again while he shivered within the damp walls of the dungeon, but that we can never confirm. Because of that place he would only emerge — already dying — to the hospital and finally to a grave in the cemetery.

Villar Mendoza, the prisoner who recently died of a hunger strike, made a living doing carpentry and masonry work. His specialty was the most slender and beautiful wooden flowers that tourists buy as souvenirs to remember this island. A stalk and six petals carved with the patience of one who knows that time is not worth much in Cuba, the minutes will not bring him anything more successful or happier. He gave form to a piece of cedar, shaping it for hours and hours, brooding with that frustration that is always greater among the youth of the province.

In September 2011 this sense of social unrest led him to join the opposition group Patriotic Union of Cuba. According to the official propaganda je was a common criminal who had even “brutally” beaten his wife in July last year. But too many witnesses, including his own wife, suggests that such insults are only trying to kill his image after the death of his body.

In Cuba, in the words of a friend, “nobody knows the past that awaits you,” because criminal records of citizens are also determined by their political behavior. As there is no separation of powers, as the judicial system is not independent of the party branch, those whose ideology falls short will find it reflected in their criminal records.

Generals have been known to have shoot their mistresses, ministers caught in million dollar embezzlement schemes, children and their fathers involved in various crimes that have never been brought before a court. But when it comes to an opponent of the regime, it is enough to have bought milk on the black market, quarreled with your wife, or parked your car badly, to be taken as a culprit.

The Criminal Code does not include any section for “political offense,” so that the “inconvenient” are always charged under another section. Which is what happened to Wilman Villar Mendoza, who resisted police arrest on July 7, 2011 after a domestic incident. Purely by “coincidence” he would only be prosecuted for this case four months later, when he participated in a protest against the government. On arresting him, an officer shouted in front of several witnesses: “now we’ll make you disappear,” and they did.

The practice of turning activists into criminals is nothing new. In February 2010, when Orlando Zapata Tamayo died after 85 days without food, Raul Castro said publicly that he was a common criminal. He had forgotten that seven years earlier in the book The Dissenters, prepared by pro-government journalists to justify the imprisonments of the Black Spring, Zapata Tamayo appeared with photo, name and surname. Playing with history and rearranging it tends to create these contradictions … since no government has ever been able to predict “what the future holds.”

Fortunately, a criminal record can not explain all of the attitudes that a man comes to take in his life. To present Villar Mendoza only as a choleric husband who beat his wife does not explain why he was left to die without food. To accuse him as a common prisoner seeks to reinforce the Manichean idea as that in Cuba there are no decent people, patriotic and law-abiding, who are also opposed to the government. Hence the flood of insults that have rained on the memory of the deceased and the official interest used his civic activism as a way to “clean up” some criminal past.

A recent editorial in Granma asserts that there was no hunger strike. It does not explain, however, how someone only 31 years old deteriorated so rapidly in two months of confinement to the point of dying in a hospital from “multiple organ failure.” There is also the testimony of relatives and friends who visited Villar Mendoza in jail to convince him to eat again, but could not get him to stop repeating “Freedom or death!”

To disprove the official version, there are also numerous reports of fasting that appeared in news media in exile and Twitter accounts of local activists since mid-December. The Internet shows what the Cuban press hides.

According to the statement of Maritza Pelegrino, her husband ceased to feed himself on November 24 when he was sentenced to four years imprisonment. He interrupted the strike on December 23 because his jailers made him believe that he would be in the list of prisoners pardoned by General Raul Castro. But he returned to starvation six days later in finding out that all those promises were just lies, dirty tricks. 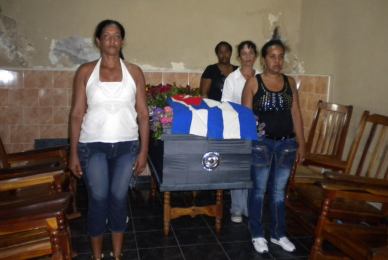 Tied up and naked they then put him in the punishment cell where he contracted the pneumonia that would kill him. He arrived at the hospital on January 13 and doctors warned the family that only a miracle could save him. Less than a week later he was no longer breathing.

Wilman Villar was killed by the late medical intervention and neglect of those who should have watched over him in prison. A system that has cut off all peaceful, civic and electoral paths for citizens to influence national course killed him. He was turned into a cadaver by a judicial apparatus riddled with irregularities and ideological preferences, where a political opponent is held guilty of any crime with little chance to prove otherwise.

It was not just the lack of food or water that caused the sad outcome of January 19, but having to use one’s body as a public square of indignation, on an island where protest is prohibited.

At his death, Wilman Villar Mendoza had two daughters, aged five and seven years. Their mother still does not know how to explain to them what happened.