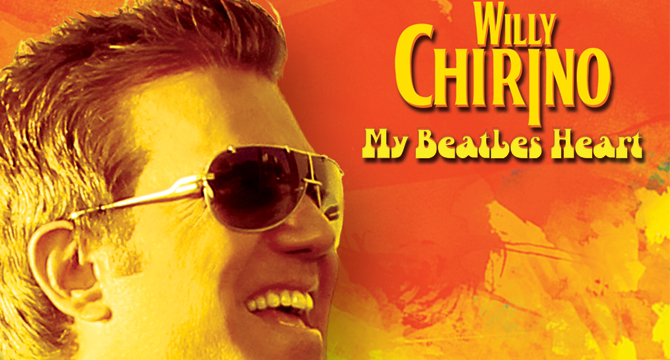 What could be better, for an admirer of his work, to listen to Willy Chirino live and in person for two wonderful hours? Yes, at least for me: to listen to him honor the Beatles during those two hours that never should have ended.

I think that I could not have dreamed of a better first encounter with this sui generis icon of Cuban music, paying tribute to a genius with which he, perhaps without noticing it, has more in common than strictly musical influences.

Willy Chirino belongs to a strange breed of Cuban artists: those they never managed to expel from their land; those who conquered — by a knockout! — any limitation, dictated censorship, attempt to extirpate their songs, on an Island where to freely listen to music continues to be as utopian as the most primary freedom.

Some musicians applauded by the Hispanic community in exile faced the hard luck of becoming, in time, strangers, distant exponents for their brethren who remained in Cuba; Willy Chirino can be considered the unrivaled winner: I dare say that not even the great Celia Cruz was able to stay so rooted, of such constant interest to Cubans of different eras.

The king of underground parties, volumes controlled to avoid the eardrums of the CDR, suspicious listeners (for those who say, “and what if the police come knocking at the door?”), continued and continues to be Willy Chirino.

In particular, to know him singing the Beatles did not surprise me at all. For decades, Chirino confessed, in a certain threatening tone, his devotion to the boys from Liverpool. As he tells his followers, “Listen to me, I’m not telling you this for my own pleasure.” Ergo, to expect a tribute album to his (our) British idols was the chronicle of an announced work.

However, even for a musician of proven talent, even for the author of memorable albums such as Oxígeno y Asere, I admit that My Beatles Heart elevated my perception of the dreamer of melodies that is Willy Chirino by another rung. Every time I find it harder classify his music, to limit it to a stylistic context. Before, to call it salsero or popular music seemed reasonably accurate. Today, I think he knows, he’s made it hard for us.

As a sober attempt to avoid clichés, suddenly winking at his uncontrollable Beatlemania, Chirino didn’t choose an expected setlist for his album. He didn’t choose Yesterday, or Hey Jude, or Let it Be. He didn’t give in to a possible Imagine. Chirino leaves out too many songs for it to be coincidence. Even when he takes hold of All You Need is Love, Yellow Submarine and Come Together, his album strives from another principle: the honor of a whole work, not collection of works. In My Beatles Heart no part is more celebrated than the whole.

Was Willy aware, just when he signed the first of the endless documents; when he informed the Sony plenipotentiary that he wanted to cover his favorite boys, of the crown jewel, of the subtle and bittersweet irony implied in the Beatles in his voice?

The boys from Liverpool join Chirino in the immeasurable honor of being banned for decades in Cuba, the only country where until yesterday they zealously kept watch so that no one would listen to the dazzling British youngsters, and today they keep watch so that no one will steal the glasses off the statue of John Lennon in the park in Vedado.

Willy continues to be strictly forbidden. Lennon, Paul, Ringo and George, no. But more as an institutional farce with the key roles acted by the guardians of Cuban music order, a breath of subversive complicity continues emanating from musicians who have stuck out their tongues with malice aforethought at the greatest absurdity implemented by all known dictatorships: wanting to stop the unstoppable expansion of valid art.

So while listening to Willy last Saturday at the paradisiacal “Adrienne Arsht Center” in Miami, watching him talk with his eyes shining with pride and pleasure in his homage to the Beatles, the album confirmed something I had heard three days before: Willy Chirino not only sang them to his idols. With the tender versions he gave their themes, the musician of Consolacion del Sur thanked the causes of so much immortal music for their mere existence.

Three works of My Beatles Heart — Across the Universe, I’ve Just Seen a Face, and the mix I’ll Follow the Sun / Here Comes the Sun — revealed to me something of a subtle secret subtle: Willy Chirino was falling in love with those songs. In his voice they seemed like women courted. Willy doesn’t sing them, Willy sings to them. And I think I realized it from the impeccable production of his disc, before I saw him in concert: the miracle of a man with his own work, the undoubted owner of a vital space of Cuban music, prostrate with blind rage and humbled by their inspiration.

Just for that, just to see Willy as fascinated as the public itself, was worth not missing his show. But for me, in one of his songs I found the reason, in my childhood school in Cuba, to begin to distrust the slogans that they wanted to inject into my brain; for me, when I raised my artistic perception marking Oxygen with asterisks; and above all, for me who has long learned to breathe the freedom that only music allows, knowing the Beatles beat of Willy Chirino involved an experience that left footprints.

Meanwhile, I end this line as, in the background Across the Universe also comes to an end, and I find myself, along with the Cuban musician, along with the four Brits, saying that nothing will change my world. And how good that they are in it.