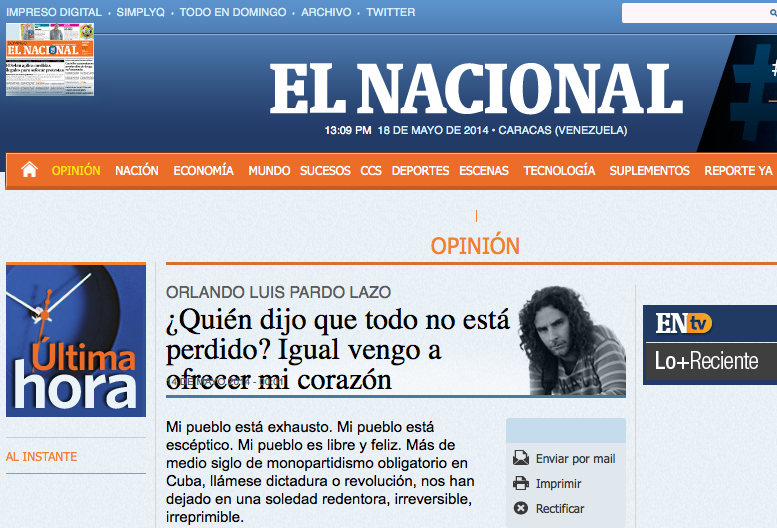 My people are exhausted. My people are skeptical. My people are free and happy. Over half a century of forced one-party rule in Cuba, call it a dictatorship or a Revolution, has left us in n a redemptive, irreversible, irrepressible loneliness.

Cubans escape from Cuba. That is now our victory, our permanent plebiscite. We are leaving. Goodbye, intimate and intimidating little island of my love. Goodbye, homeland lost and unforgettable forever. Goodbye, finally, Fidel.

We did the best we could while we could. For decades and decades trying to place a magic bullet in the heart of Castro. To kill death. Or busting his head in his convertible Mercedes Benz, like Dallas. Very diabolical, perhaps also very vaudeville.

But we lost that first marathon of who killed whom. We didn’t even dare to poison him. To put him in a wetsuit with skin toxins. To give him an exploding cigar, to make him fly into a thousand splinters in the worst half of our country. A foreign woman, Evita excited that she sat on Fidel and squeezed from him a couple of olive green orgasms, cost the CIA thousands and thousands and all for what. The Commander amply demonstrated his criminal ability was second to none. Whoever kills first, can not be killed later. That’s how it is.

We Cubans knew, but today we do not want to acknowledge that assassination was, from the beginning, the only magnanimous alternative against Castroism in perpetuity. Our dead, disappeared, tortured and deported numbered in the thousands in every generation and, in turn, they are bodies that will count for nothing. Bodies that nobody will count. Detritus for the databases. Latin America laughed to the rhythm of the revolution. We were dying. But it already happened.

In the end, we are all going to die on a bed, in posthumous peace. No more bodies in the streets of Cuba. We got tired of falling. A blow-up pillow, this will be our best shroud. Like Castroism is not an octogenarian orthography. Kills just coasting. His immortality discolors every moment drop by drop. And, as the image and likeness of Fidel was designed and imposed on the country, pregnant Cubans today give birth to octogenarians as obsolete as he is. We are aging as a nation. From delirium to decrepitude without transition.

My people are impossible, postnational. My people are the most perfect possible. I wonder if it has not been this excruciating victory, at the turn of more than a half century of dictatorship and revolution , we Cuban catch ourselves, irreconcilably between them, making ourselves at once ungovernable, unFidelable, condemned to, or better yet decorated with, the malevolent medal of a perpetual diaspora. To err is preferable to the horror.

Fidel, you won. We let you live. Peoplecide. But prepare yourself for what is coming  You will have no country to scatter your ashes. There will be no history where you are glorified. There will be no time to pay attention to you. We will be so happy without you. I love you. From this unlikely unlimited freedom, we love you. We return you to the disappointment, this proud orphanage from where you can never return.