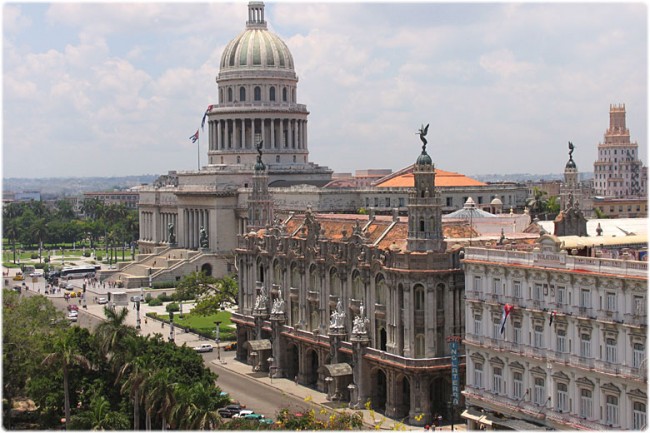 Right now, many Havana residents are sending up last minute prayers that the hurricane won’t hit the city. The hurricane season, June 1 to November 30 this year, has been gentle with Havana. Thank God.

The capital of all Cubans has an infrastructure of tears. The Fourth World. The ancient buildings in the old part of the city crumble under moderate intensity downpours.

Most are held up by a miracle of physics. Decades of lack of building maintenance has resulted in Havana suffering more than it should from any natural phenomenon.

Avenues and streets are overflowing from a persistent downpour. The sewers are clogged with vegetation, or don’t work at all and collapse in a few minutes. The exposed electrical wiring decomposes in the wind, with gusts exceeding 35 miles per hour.

‘Paula’, the latest tropical storm, insignificant in terms of strength, caused 48-hour blackouts in various locations around the city. The Havana seafront is in urgent need of repair. Winds from the north or bad weather cause severe flooding that affects residents in the areas of Vedado and Centro Habana.

For a habanero, the worst that can happen at this time is a late hurricane. Otherwise, it’s the best time of the year. There is not the usual stifling heat. The nights are cool, the mornings bright and full of possibilities, the sun bearable.

True, the skyrocketing number of beggars are crowding out and bothering passersby in the main streets, parks and squares. And public transportation is going from bad to worse.

In the fall there is a more active cultural and sporting life. Although theaters are few and most are damaged and lack air conditioning. Like the movies theaters. Of the 300 theaters in Havana in the ’80s, in 2010 only around 40 remain. Almost all are rickety, the seats broken, the ushers lack lights, the bathrooms are as dirty as can be. Still, the cinemas of the city are preparing to receive a flood of people when, in early December, the curtains rise on a new edition of the Latin American Film Festival.

Also in the fall baseball season begins. Without a doubt the greatest show there is in this country. There will be about 50. And the government and the relevant sports federation intend this year to be the highest quality in half a century. I doubt it. With a Pleiad of young talent taking to the road to the American and Latin American major leagues, the old Cerro Stadium, in a critical state, does not augur a high quality season.

La pelota, “The ball,” as Cubans call baseball, and movies are still within reach of everyone. The entrance to the cinema and stadium costs ten cents. Outside, five pesos (0.25 cents) buys a package of popcorn… so let’s entertain ourselves!

The worst part of attending any event for most people comes when it’s time to catch the bus to go home. The next day, when the excitement of the game or the film is over, routine returns: the lack of hard currency and the headache of trying to come up with two hot meals a day, or a snack for the kids to take to school. We Cubans are already used to that reality.

Despite fears of a sudden storm, the evident deterioration of the city, the legion of beggars and a government that has spent 50 years ago shouting from the rooftops that this was “a revolution of the meek and humble,” I recommend a visit to Havana in the fall. It’s the best there is.