We have spent more than fifty years hearing talk of “the enemy.” All the blame for our deficiencies is charged to this, just like all the evils and misfortunes, product of carelessness, inattention and neglect, also go to his credit.

With that idea they have tried to hypnotize and “idiotize” the population of “our beloved planet,” and regrettably, in many cases they have achieved it. But in spite of all that, when someone thinks about emigrating, it is always to the country of the “enemy” (USA). Also on occasion to others, which they use as a bridge, in order to achieve the same end.

Many of us have resisted letting ourselves be influenced by such fallacy, but even so, due to all the notoriety that precedes the matter and to the prejudices sown around it, we take care not to fall in the ideological trap, and to pander to the representatives of power.

Just a few days ago I received an e-mail from a very dear American friend, where she announced to me the visit of a friend of hers of the same nationality who wished to get to know me, and in turn he was the bearer of a gift that she was sending me. I was very satisfied to meet him and to report that the friend of my best friend, was a charming “enemy.” Empathy soon arose between us and it remains for us to meet next time. 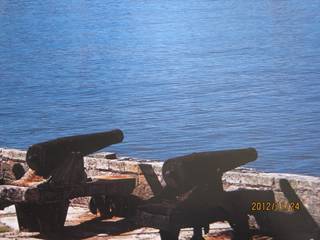 Last Friday afternoon, this one invited us to go to see the traditional ceremony of “the cannon shot,” a custom that exists since the epoch of the brief English occupation, when at exactly nine at night, they closed the doors of the walls that protected the city, and that they now recreate with a pretty representation in the Cabana Morro Tourist Complex. I was pleasantly surprised by how well restored and preserved is this emblematic place, thanks to the work of the Office of City History, the only state entity, that without fear of being mistaken, we can say has been busy rescuing and conserving some of our traditions.

We had a great time in the company of him and his parents. It was what could be called a beautiful night of “walking with the enemy.”