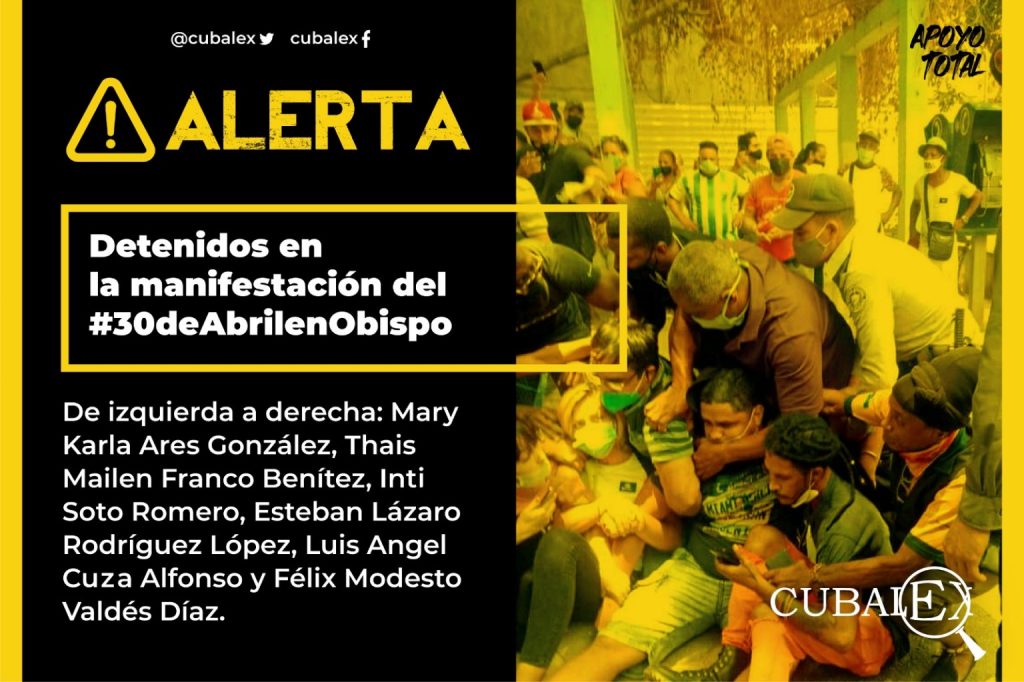 Cubalex, 28 May 2021 — The six protesters arrested during the peaceful protest on April 30 on Obispo Street in Old Havana have already been transferred to remote prisons, outside the capital and in different provinces from Pinar del Río to Matanzas.

Yuisán Cancio Vera was transferred to the Pinar del Río provincial penitentiary and Thais Mailén Franco to the Occidente women’s prison in Guatao, on the outskirts of Havana province in the La Lisa municipality, on May 22.

On Friday, May 21, Inti Soto Romero was transferred to the Guanajay prison, in the province of Artemisa, but this was not communicated to his family until the 24th, when they went to visit him at the headquarters of the Department of State Security, Villa Marista.

On May 26, ICLEP (Cuban Institute for Freedom of Speech and Press) announced that Mary Karla Ares González, citizen journalist and member of the Network in Defense of Human Rights, was being transferred to the Occidente women’s prison, in Guatao, in La Lisa, as confirmed later by her father to Cubalex.

Another journalist Esteban Rodríguez, a collaborator of ADNCuba media, was transferred to the Valle Grande penitentiary, far from the city, in the La Lisa municipality, on May 26.

Luis Ángel Cuza Alfonso has been transferred to the Combinado del Sur Prison, in Matanzas Province.

Seclusion in other provinces, or far from their place of residence, in this case Havana, in the midst of mobility restrictions due to the Covid-19 pandemic, will make it difficult for lawyers and families to access the imprisoned activists, which itself is a form of punishment.

All the protesters face the same charges of public disorder (Article 228) and resistance (Article 159 of the Penal Code), with sentences ranging from 3 months to 5 years imprisonment. Requests to change pretrial confinement measures were rejected by the court.

The lawyer for the protestors has not had access to the files during the preparatory phase. On May 9, an appeal was filed against the denial of habeas corpus issued by the Provincial People’s Court of Havana. The TSJ (Supreme Court of Justice) does not usually respond to urgent appeals.

From Cubalex, we demand the immediate freedom of the Obispo protesters.