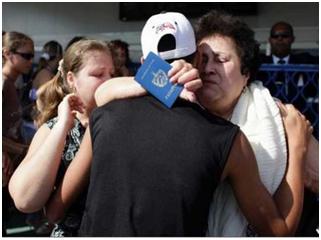 Recently the Archbishop of Havana announced the release of 52 political prisoners over the course of three to four months. A rather strange act, this being a secular state. In turn, Miguel Angel Moratinos, Spain’s Minister of Foreign Affairs, told reporters that those released will travel to his country, and once they are out of Cuba, they will require government authorization to return, while their family members may do so whenever they wish.

We should not be misled. Do not confuse a humanitarian gesture with a willingness to change. If those who are released need permission to return to the island, then the government does not have the slightest intention of removing restrictions on the freedom of movement of its citizens. Is this a breakthrough in human rights?

If they do not eliminate the entry permit, it means that they will continue to confiscate the properties of Cuban emigrants – measures imposed by the same legal provision, Law No. 989 of 1961, that also governs permanent abandonment.

Moratinos also said that the island government agreed not to “expropriate” the homes of dissidents in Cuba, among other unspecified compromises. Some doubts remain. Under what legal assumptions will the Cuban state fulfill the concessions?

The government declares a permanent abandonment and proceeds to confiscate the property of nationals who choose to reside permanently outside the country. Permission to reside abroad is given to Cubans who are married to foreigners, which does not apply in this case.

Will there be a legal formulation about this? What guarantees do these people have that, once they are abroad, the government will fulfill a commitment made by the representative of a foreign state? Who will compel it to comply? What will happen when it asserts the principles of state sovereignty and non interference in internal affairs? There is too much uncertainty to claim victory.