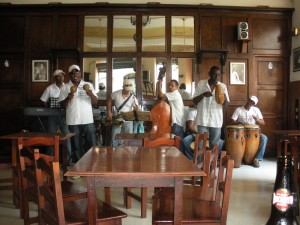 They say that Benny Moré, before becoming “the barbarian of rhythm of Cuban music,” passed the hat in the bars of the Avenida del Puerto in Havana, where he sang with his guitar for a plate of food and three rums. In one of those bars he discovered the famous Miguel Matamoros, who needed another voice that alternated with his own. The rest is history: Benny displayed his talent in Mexico, New York and then in the recording studios and nightclubs in Cuba.

History repeats itself on our island and in the countries n the continent. At the end of the nineties Polo Montanes rose to fame, the natural Guajiro from Pinar del Rio, discovered by a foreign producer at a recreation center in the province. Polo triumphed in Colombia before being released in Havana.

Decades after the “Barbarian of Rhythm” passed the hat, talented musicians depend on the currencies of the tourists who go to bars, restaurants and hotels along the Avenida del Puerto, Prado, Obispo and other streets of Havana, where they surprise by offering sones and guarachas for diners.

Tourists are not as lavish but the menus are expensive and they assume that they include the creole rhythms, jazz and the universal songs played with local flavor by small groups. Maybe that’s why they don’t understand why one of the musicians passes the hat and tries to sell an album at the end of each set.

If you conversed with the artists you would know that despite their professional level and after playing ten or twelve hours a day, they take home only what is collected with the hat or the gourd, because their salary in local currency is shameful.

The income earned by singers and instrumentalists is the equivalent to 160 CUC per month for the group. Of that number, 50% goes to the company that represents them, 10% to the tax office (ONAT), and the rest is divided between them, almost eight dollars a month.

The musicians are paid for four to eight days a month, although they perform 15 to 30. This also includes procuring the instruments, sound, transportation, promotion and managing the day or night contracts, including the Salon Rosado de the Tropical and music houses of Havana, Varadero and Santiago de Cuba, where the administration gives priority to the highest-rated bands, though they do not represent the most authentic Cuban music.

To make matters worse, they must have an affiliation with a company of the ministries of Culture and Tourism, and respect for the rules of the corps of inspectors who seize instruments, impose fines or close down their contracts if they see them selling discs or other irregularities, though they encourage bribery to compensate for their own salaries.

The rules of the businesses contribute to dozens of vocal and instrumental groups being deactivated every month, required to perform 19 activities a month when artistic demand is decreasing and for lack of budget they’re closing the venues. This excess has been criticized by the likes of Adalberto Alvarez, Juan Formell, Lourdes Torres and Tony Pinelly, who told a radio station of the capital that “if companies flew through the air they couldn’t pay for the damage they do to the artists.”

The musicians have to pay for their own CDs and compete with the emerging reggaeton artists and figured benefited by television and on state labels, which opens the doors of agencies that pay better and offer their shows in hard currency, inspired by foreign rhythms and patrons.

While the musicians survive by passing the hat, some authors with access to the mass media censor “the imitation of foreign” and seek “to promote Cuban music without ignoring the universal.” Rafael Lay, director of the Aragon orchestra, told the newspaper Juventud Rebelde that he was surprised to know that the brass band of the twentieth century is not “appropriate to perform in the music venues,” whose programmers prefer reggaeton.

A former singer of the group warns that the problem is worse in the provinces: “From Havana it’s impossible to know the talent that is lost in the interior, which influences the exodus of groups and principals to the capital which then becomes a bridge to overseas.”

Some think that passing the hat is demeaning and that “we are paralyzed in time,” that it’s enough to travel to Mexico, the United States or Spain to look at to other figures and see how the mechanisms of promotion work, less bureaucratic than in Cuba, where voices such as Lourdes Torres and Leo Vera work in cabarets and have no CDs out.

Everything seems to indicate that, “Today is like yesterday,” the silenced soneros have to wait for someone to discover them in the bars and promote them abroad, to be recognized on the island, as happened with the aging members of the Buena Vista Social Club.