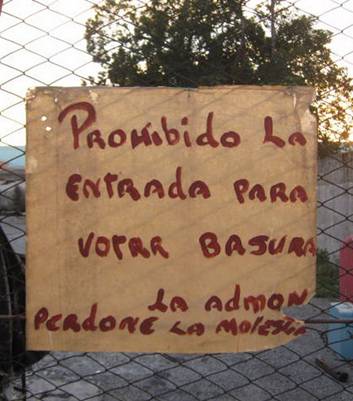 It is prohibited to enter to throw out trash. Sorry for the trouble.

Now that we have spent half a century VOTING* garbage, doesn’t it seem like time for containers that are appropriate, adequate, accessible to the population and located in all neighborhoods, in order to be able to THROW OUT the garbage properly? It’s up the voters to demand it of the mayor*, wait, I meant the delegate*.

This sign is located on the park fence at a work site on 41st Street between 26th Ave. and Conill B, Nuevo Vedado.

Translator’s note:
This post derives from the fact that “B” and “V” sound the same in Spanish and that the word for “vote” is “votar” and the word for “to throw out” is “botar.” The sign painter has misspelled “botar.” The line with the “mayor” vs. the “delegate” is a reference to the fact that under the Castro regime, cities no longer have mayors, but they do have delegates to the National Assembly of People’s Power. (And apologies for a note that is longer than the post!)
January 21 2012