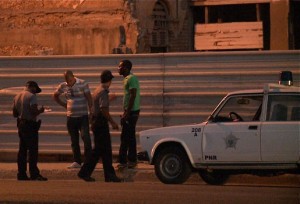 For the ‘Palestinians’, as people from Havana call those born in the eastern provinces, to live in Havana is almost a mission impossible. By Decree 217, passed in 1997, the law sanctions and fines people born outside the capital who wish to settle there without official permission.

It’s like a border without a border. There is no wall that prevents thousands of easterners from moving to Havana. But thousands of regulations, inspectors, police and members of the CDR (Committees for the Defense of the Revolution), are directed at the newcomers who settle in neighborhoods of the capital.

Not all hate people from Havana hate the ‘Palestinians’. But there are many who have a grudge against people from Santiago, Guantanamo, Las Tunas, Holguin and Granma, among others who arrive on the early morning trains with antiquated suitcases and the desire to conquer the world.

Easterners who come to the city have the same aspirations as an exile when he leaves his homeland. To make money and help their family. To flee their provinces shocked by the poverty and lack of opportunities.

In general, they are good people. Do everything. Care for a garden, collect aluminum cans for 13 hours under a fearful sun, pedal the pedicabs in the vicinity of the Capitol and Havana’s Central Park.

There are also the sleazy types. Violent fringe. Pimps. Thieves. Crooks and cheats in the game of fools, who in a blink of an eye pluck the money.

For the police it is easy to identify an easterner. Because almost all of them are also easterners. They recognize them by how they look and the “singing” sound when they talk, along with swallowing their the S’s. Any given night, a truck packed with policemen make their raids.

They ask for the identity card, and if they have the right papers, they make them talk. Those “sing” when they talk are handcuffed to the truck. The removal process is expedited.

The next night they put them on the train, back to their villages. Deportees. Prohibit them from visiting Havana for 3 years. They are excommunicated in their own country. Of course, this procedure is unconstitutional.

Havana is the capital of all Cubans. The easterners are not a different ethnicity. They are of the same nationality. But in practice, the authorities treat them as if they were authentic Palestinians from the West Bank or Gaza.

Still, they manage to return and settle in the ‘plate’, as they call Havana. On the outskirts of the city settlements have grown up. Concuní is one of them.

State inspectors have threatened to bring bulldozers and destroy the trail of huts and aluminum shacks. But the easterners are planted as if they were mambises. Machetes and sticks in hand, trying to defend their right to live better. Women and children armed with stones. Given this mess, the authorities turn away.

These settlements are true slums. There in the towns of Regla, Guanabacoa, Cotorro, Lisa, San Miguel de Padron and Marianao. The living conditions of their people are subhuman.

There is no drinking water. People do their business in bushes or on rudimentary latrines where the excrement drains into the vicinity. Almost none of the eastern residents in these favelas have ration books.

They eat what they can get during the day. Or do not eat. Paul, from Santiago who lives in one of these settlements, says he has gone up to three days without eating. “The food I find or that friends give me is for my children.”

In a cardboard and wood shack without electricity, TV or fridge, he lives with his wife and three children. Paul wants to get a job and support his offspring.

It will be difficult. Managers of companies and state institutions can not accept ‘illegals’. Therefore, they are forced to work “on the left” — under the table.

Many of the illegal easterners no longer have homes in their home provinces. They burned the bridges. They sold everything to try their luck in Havana.

Despite the odds, they are optimistic. From the time the sun rises, they go out to try to get some pesos. Returning late at night. Sometimes with food and money. At times with empty pockets.

Their worst enemies are the police, mostly civilians. Above all, they have to endure taunts and sneers of some habaneros, who call them ‘Palestinians’ to humiliate them.

Between Havana and the East a wall of police harassment and abuse has built up. With the consent of the authorities.