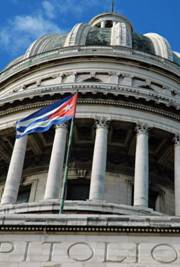 Since the introduction in early 1959 of the term bitongo* to refer to youths who voiced opposition to the newly formed regime, Cuban authorities have routinely used denigrating terms when referring to those who do not share their ideas or their proclivity to publicly express them.

Annexationists, Plattists, mercenaries, imperial lackeys, traitors, stateless, anti-Cuban and many other epithets have been extensively used for more than fifty-four years. They continue to be used even today as tools in campaigns to discredit opponents. The term most commonly employed, however, has been gusanos, or worms.

Gusanos were professionals, intellectuals, artists, workers and students who first said no and they are those who continue to say no. The term has become so ingrained in the public’s mind that many people use it indiscriminately, without thinking about its meaning, to refer to anything that veers from the official party line. For these people there is no such thing as someone who thinks differently; there are simply gusanos.

Inertia has led some opponents and dissidents to also use the term when referring to themselves or to others who sympathize with their ideas. A well-known woman, now deceased, who was opposed to the regime from its very beginnings, used to say with pride that she was a “protozoan worm.”

While not going such an extreme, the term’s usage continues to grow even today within Cuban society, throwing a log on the fire of division and political confrontation. It is the preferred term among defenders of the regime during disturbances carried out by students, workers, professionals, artists, housewives and others mobilized under the official banner of “an enraged people” who participate in “acts of repudiation” against the Ladies in White and other peaceful opposition figures.

The term anti-Cuban is reserved for those living overseas, wherever they may be, who carry out orders issued by “Miami’s anti-Cuban mafia.” In reality what exists in Miami is a powerful group of Cubans opposed to the government — a situation repeated in other cities around the world — just as there were Cubans opposed to the Batista dictatorship in the 1950s. It did not occur to anyone at that time to label them anti-Cuban because they were not that then nor are they that now. Politics is one thing; Cuba is something entirely different.

Distorting terminology to take advantage of the confusion this creates and generalizing disrepute has been a regular practice of Cuban authorities. This is not conducive to creating the climate of tolerance and mutual respect essential to producing the national dialogue that Cuba needs.

Translator’s note: Someone who is arrogant, haughty, vain, swell-headed; a bourgeois youth.