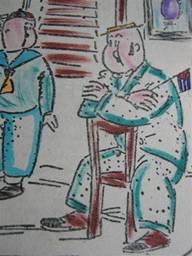 Illustration: The Fool by Eduardo Abela

I began thinking about the tiny flags printed on fabric or paper that everyone used to wave in rhythm at the city’s weekly demonstrations during the “battle of ideas.” Like Abela’s fool, they have passed into oblivion along with his creator.*

However, they have reappeared in the hands of healthcare workers, clad in their white lab coats, off to confront, with those from other countries, the Ebola epidemic on the African continent.

First of all, I think that — besides being uncomfortable — travelling dressed in a white lab coat while carrying a tiny flag comes off as extremely quaint, though it seems to be more part of a propaganda stage set than the mission itself.

In the battle against Ebola, envoys from other countries travel dressed as ordinary citizens. They do not need to disguise themselves as healthcare workers to be recognized as such; the habit does not make the monk. To treat their patients, sooner or later all of them will have to take off their lab coats and put on the special protective suits provided to them for this purpose.

Drawing comparisons, a television commentator noted that the United States had sent three thousand troops without mentioning that in that country such emergencies are handled by military health and sanitation units, which receive highly specialized training to deal with such situations, which means not having to utilize staff from the national healthcare system. A similar approach is taken in other countries. Before expressing an opinion, it is advisable to be informed on the subject in question.

If we are to believe the official press, Cuban specialists constitute the main force battling Ebola, though in fact this is not the case. In reality they are among thousands of specialists from many different countries. What is happening here is that, as usual, our media is simply ignoring everyone else. This does not detract from the merits of the mission, but it would be advisable to set aside chauvinism and not try to reap political gain from the misfortune of others.

Furthermore, to label as “heroes” those who only just began treating Ebola a few days ago seems premature. The current use and abuse of this little word has certainly reduced its respectability and caused it to lose the value it once had. Nowadays, the term “hero” is used too hastily in our country.

*Translator’s note: El bobo, or the Fool, was a character created by Cuban cartoonist Eduardo Abela in the 1930s as a satirical commentary on the government of Cuba’s then-president, Gerardo Machado.