Over years of absurd regulations and prohibitions, and the refusal to sell construction and other materials to the people, to maintain and repair their homes, these have fallen into disrepair until their condition today is critical and disastrous. This also contributed to the inability of the authorities to create the required buildings needed to mitigate the loss of housing stock, but they did nothing to avoid it. The State wanted to control everything and failed miserably, proving once again that its reach is beyond its grasp.

Today, the same government responsible for creating the situation, states that each owner must maintain and repair the home they occupy, with their own resources. It’s realistic and fair, except that, with the accumulated deterioration and the high prices in which they sell the materials and other resources, the majority in CUCs, a currency in which they do not pay salaries, makes it quite difficult for citizens to do so. Once again, State inefficiency is passed off on the shoulders of the population, without any excuses for the glaring mistakes committed.

On to other topics.

Crossing Havana on foot, with the exception of some principal and tourist avenues and streets, has become an orthopedic adventure: the lack of sidewalks or their advanced state of deterioration, produces injuries, sprains, falls and fractures left and right. They say that’s why we are a medical powerhouse, but how awful is it that there is no organization responsible for maintaining and repairing the streets.

Before, in times past, the responsibility belonged to the municipal governments. Those having disappeared, they were replaced by the so-called Municipal and Provincial Administrations of the People’s Power, who’ve never interested themselves in the matter. With their responsibilities diluted in multiple tasks, primarily political, the sidewalks, like the houses, have not been among their priorities and, even now, there is no light at the end of the tunnel in this regard. The fault, for the most part, is attributed to the roots of old trees. Hopefully the solution is not to leave us without trees! 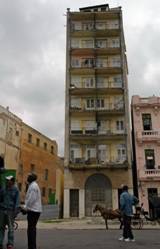 A great deal happens with the streets: with the exception of main thoroughfares, the rest, in any municipality, appear to be neighborhood streets so damaged that they cannot accommodate vehicular traffic, on pain of having to send the car directly to intensive therapy at some car repair place. Besides the potholes, sewage ditches, accumulated waste, old junk, and other things, the nauseating odors perfume the air, giving the lie to every ecological folly touted by radio, television and newspapers.

It’s easily understood that the great economic and political problems don’t always affect us, but the small ones are those that make life a real headache to the majority of citizens, who trip on them every day.