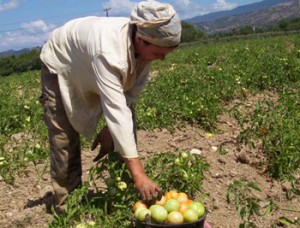 HAVANA, Cuba , January www.cubanet.org – The productive uselessness of the regime forces it to import vegetables to meet the demands of international tourism, especially tomatoes. The results of the 2013/2014 tomato harvest does not appear in the press and is barely mentioned by the agricultural authorities, due to the huge losses of private producers, who in previous years saw themselves lose their crops due to lack of marketing and the capacity of the processing capacity.

The tomato is the horticultural product of major economic importance for the country, highly demanded by the population and industry, which transforms it into juices, pastas and other derivatives. But since the current harvest began, prices range between 5 and 10 pesos (national currency) per pound, and no price reductions in the offing. This situation has forced people to drastically reduce consumption.

Although there has been no published information on the crops and the current production results, experts on the subject say that one of the causes of the collapse is related to seed varieties and decreased planting areas, in addition to low levels input delivery to non-state producers and poor disease control, lack of chemicals (pesticides and fungicides), which must be imported.

The only news coverage on the subject, in the last sixty days, took place on a television program about the industrial processing of fruit and vegetables by the citrus company Ceballos, in the province of Ciego de Avila; and a commentary signed by José Luis Merencio Cautín, in the Granma newspaper announcing the tomato harvest in Caujerí Valley in the province of Guantánamo.

No statistical information has been compiled for 2013, so it will not be published in several months, according to the National Bureau of Statistics and Information (ONEI). Only through a formal and substantiated request, will they grant access to any kind of information, until the yearbook will be published, and with prior authorization of the competent entity, considering some of the data classified.

Meanwhile, the dissatisfaction of the population increases, but General President Raul Castro Ruz persists in declaring that, “The Revolution remains the same, without any commitment to anyone, only with the people.”