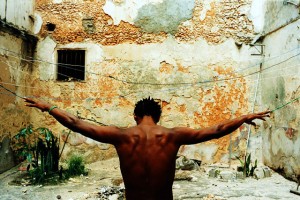 HAVANA, Cuba, January, www.cubanet.org — Doorways where until a few days ago all kinds of clothes and shoes were for sale are now empty. All the usual stalls are closed. It is a return to the recent past, confirmation that the economic openings are not as open, but quite the opposite: they narrow.

The state of opinion on the streets of Havana is negative. Skeptics have multiplied and pessimism is heard in normal conversations. A taxi driver who was driving an old American car, in the dark December nights, predicted to this reporter what the new year would be from his vision at that time. According to him, he’d never seen such a dark end of year, perhaps not even such an infamous December 31, 1994, when a cigar box cost 120 pesos (the entire pay, let’s say, of a secretary).

The man apparently was not mistaken in his forecast that 2014 would be fatal. The first thing that happened is that an important branch of trade is dead. There will be no stalls where the poorest buyers can go looking for something to wear. People are angry, as the Cuban population usually is without any spontaneous social event occurring.

Taxes will rise this year. They fixed route taxi drivers (popularly known as “boatmen”) must now pay 1000 pesos basic tax instead of the 700 paid to the State. That money does not count in the affidavit that must be paid periodically and is an additional charge. If on top of that the price of fuel continues to rise, as has happened in recent years, it is expected that the fares also shoot up.

Meanwhile, the bus stops appear full at all times. Transport is scarce, as always, and the cars that have recently been put on sale in State dealerships are at ridiculous prices. What Cuban could spend, for one of them, 200,000 in CUCs, about the same as $200,000 USD, or 4 million 800 thousand Cuban pesos? However, senior regime officials have said that the motor vehicles profits will be invested in public transport. What does not fit within their mysterious calculations is that sales volumes are too low, judging from the official price .

This is a government that is trying to get into global capitalism in the most unfavorable way possible, especially for the population. There are fewer products  “subsidized” each year. Every time they make more rationalizations” in public spending. The dubious tendency to improve economically stops, while hopes for reforms also stop. 2014 was sentenced to death in the speeches of late December and the judgment seems to be running through and through .